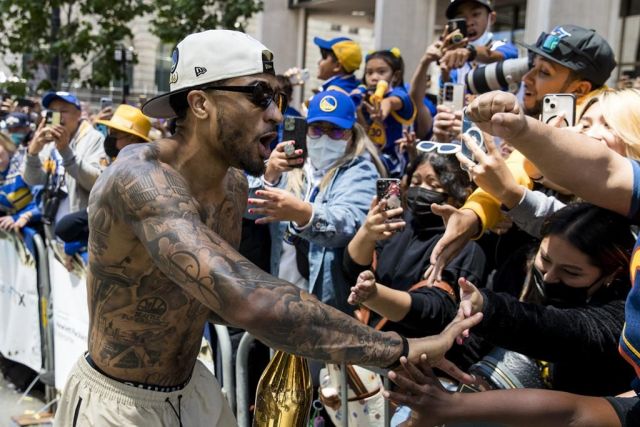 A person with direct knowledge of the deal confirmed on Friday that Payton would depart the NBA champion Golden State Warriors to join a backcourt alongside Damian Lillard and lottery pick Shaedon Sharpe, selected with the seventh overall pick in last Thursday's draft.

When the season ended, longtime journeyman Payton acknowledged he couldn't wait to finally get his payday in free agency. A G Leaguer for so long, Payton was cut before the season began and he was ready to take a video job with the organization before being re-signed.

Payton said he couldn't wait “to just relax and take a breath.”

“It's just relief just after everything on the journey, just everything I've been through,” Payton said on Warriors' exit-interview day June 18.

The 29-year-old Payton — son of former Seattle SuperSonics star Gary Payton — emerged as a defensive stopper for Golden State, returning from a broken elbow to contribute in the NBA Finals against Boston that the Warriors won in six games.

Payton was injured when Grizzlies star Dillon Brooks committed a hard foul across Payton’s head on a layup attempt during the second round. He fell awkwardly at Memphis on May 3.

Brooks received a Flagrant 2 foul and was ejected, then suspended for one game without pay for what the NBA called “unnecessary and excessive contact.”

Payton's efforts off the court helped make him a fan favorite and meant so much to the Warriors and San Francisco, too. He received the NBA’s Bob Lanier Community Assist Award on May 31 for his work supporting dyslexic children and pushing for early assessment.