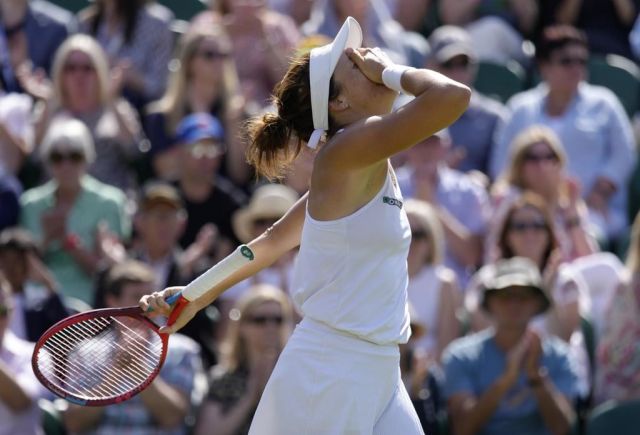 WIMBLEDON, England (AP) — Tatjana Maria's Wimbledon run appeared to be in trouble when Maria Sakkari was a point away from going up 5-1 in the second set of their third-round match.

Then Maria turned it around — in a hurry.

The 34-year-old German won the next three points to get to 4-2 and later rattled off five games in a row to beat the fifth-seeded Sakkari 6-3, 7-5 at the All England Club.

The 103-ranked Maria reached the fourth round at a Grand Slam for the first time in her 35th appearance at a major.

“It’s pretty awesome,” Maria said. “I think I played a good match from the beginning to the end."

Maria's previous best at a Grand Slam was the third round at Wimbledon in 2015.

Sakkari defeated Maria 6-4, 7-6 (2) in the first round of this year's Australian Open. The German said that match “gave me some confidence ... and I knew that I have my chances. If I play clever and good, I can win this match."

The 26-year-old Sakkari, a two-time Grand Slam semifinalist, made 30 unforced errors — including a forehand volley into the net on a break-point chance in the sixth game.

“It was a very bad performance from myself. Very disappointing,” said Sakkari, who has yet to get past the third round at Wimbledon. “I mean, credit to Tatjana. She played very good. She played her game. I just messed up with my game plan and everything.”

Next up for Maria is 12th-seeded Jelena Ostapenko, the 2017 French Open champion who advanced with a 3-6, 6-1, 6-1 victory over Irina-Camelia Begu.

Heather Watson also hadn't reached the fourth round at a Grand Slam tournament — until Friday. The 30-year-old Briton, making her 12th appearance at the All England Club, beat Kaja Juvan 7-6 (6), 6-2.