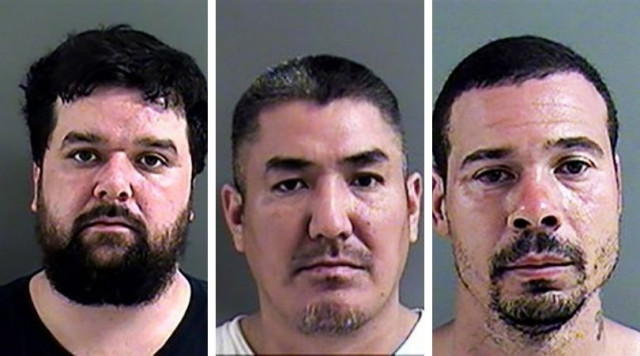 A man now faces sentencing after entering guilty pleas Wednesday to four charges from a brazen bout of gang-related gunplay in which a shot was fired at a police cruiser.

Eric Vern West pleaded guilty to unlawful discharge of a firearm, dangerous driving, possessing a firearm contrary to an order and illegally possessing a prohibited or restricted firearm during a hearing before a B.C. Supreme Court Justice in Prince George.

West will be sentenced at a later date. A trial on the matter that had been set for August has been cancelled.

West and co-accused Bradley Andre Ouelette and Kenneth Ricardo Munroe were arrested Oct. 8, 2020, when RCMP were called to a complaint of shots fired in the Highglen area of Prince George.

According to agreed statements of facts presented at sentencings for Ouelette and Munroe, the three had set out to shoot at the home of a rival gang member. West was driving a silver Chevrolet Malibu, Munroe was in the front passenger seat with a sawed-off shotgun and Ouelette was in the back set with a loaded shotgun.

Around 11:37 a.m. they trio pulled up by the home and Ouelette fired two shots at the house. Shotgun pellets were found embedded in the window frame of the home, but nobody was injured.

Physical evidence supported Munroe’s claim to have fired the prohibited shotgun in the air.

As the car drove away, an RCMP officer spotted them and because they seemed suspicious, turned his cruiser around to follow them, the court has heard. The driver of the Malibu took off “at a high rate of speed” down Fifth Avenue.

A police chase ensued, as the Malibu dodged around traffic and turned onto Highway 97. A second officer took over the pursuit, which turned down 10th Avenue.

The Malibu hit the curb and crashed through the front yard fence of a home on McBride Crescent. Ouelette, Munroe and West bailed out of the vehicle as a police cruiser pulled up.

Ouelette fired his shotgun at the police cruiser, and birdshot pellets were found embedded in the cruiser’s windshield. The officer wasn’t injured.

West and Ouelette were apprehended at the scene of the crash and with the help of a police service dog, Munroe was captured in some bushes nearby.

The Bellos Street shooting was roughly 200 metres from Heritage Elementary School and when Ouelette fired at the occupied police cruiser, it was only a block away from the Duchess Park playground, the court was told. Nearby Duchess Park Secondary School was put on "hold and secure" with the students called back into the building during their lunch break.

It was the third shooting at the home in two weeks – one on Sept. 21, 2020, and one just after midnight on Oct. 8, 2020 – only hours earlier than the shooting Munroe and Ouelette were sentenced for. There is no evidence to connect Munroe and Ouelette to the earlier shootings, the court heard.