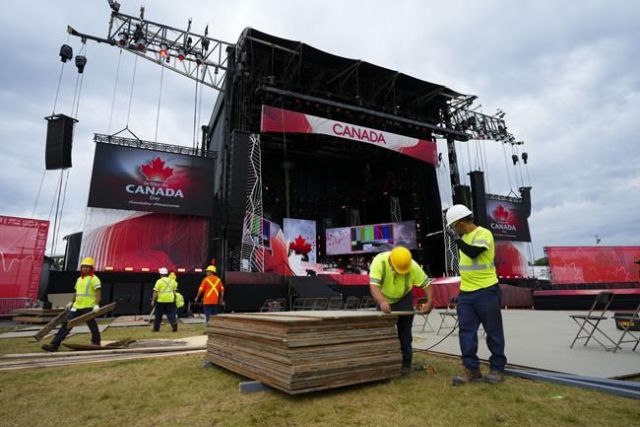 Prime Minister Justin Trudeau called for unity amid a potentially divisive national holiday on Friday, using his official Canada Day address to call for deepened commitment to Canadian values like hope and kindness.

The prime minister said the date marking Canada's 155th anniversary of confederacy offers an opportunity to embrace the values the Maple Leaf represents, adding the flag is more than a symbol.

An unprecedented level of security met locals and visitors alike in the national capital Friday for the first in-person Canada Day events in Ottawa since the onset of the COVID-19 pandemic.

Police had a highly visible presence throughout the downtown core, with groups of officers walking the streets and cars framing the entrance to the LeBreton Flats Park where the main celebrations are set to take place. Visitors had to walk through airport-style metal detectors and have their bags searched before entering.

Both celebrations and protests are set to take place throughout downtown Ottawa for Canada Day.

Heritage Canada says for the first time in 50 years, Ottawa's main celebrations are being moved off Parliament Hill, where Centre Block is under construction.

The main events in LeBreton Flats Park and at Place des Festivals Zibi in Gatineau include a daytime ceremony and evening performances, acrobatic shows and activities for families.

The Canadian Forces Snowbirds, however, will not fly over the capital as planned — a recent technical issue has been fixed but the team needs time for practice flights and maintenance before returning to the air next weekend.

Meanwhile, a new round of protests against COVID-19 pandemic restrictions are scheduled throughout Ottawa's downtown core.

Organizers say they plan to march from the Supreme Court of Canada to city hall in the afternoon, and hold a dance party on Parliament Hill in the evening.

There have been several large demonstrations since supporters of the "Freedom Convoy" occupied the downtown core for three weeks in January and February.

While police have plans in place, preventing demonstrations from getting out of hand during Canada Day is likely to be complicated by the presence of thousands of people celebrating the national holiday.

Mayor Jim Watson said Monday that people should feel comfortable heading to the Canada Day celebrations, but to be prepared for delays, street closures and other travel disruptions.

The city has put in place a vehicle control zone around Parliament Hill, from 8 a.m. Wednesday to 6 a.m. Monday, to prevent vehicle-based protests.

The bylaw department has increased fines for unusual noise, shouting, urination or defecation on roads and sidewalks, blocking a highway and idling. Fines are now $1,000 for all five offences, and the city says its zero-tolerance approach will also apply to fires, fireworks and littering.

Ottawa police said there will be significant road closures along with a major increased police presence, including support from Ontario Provincial Police and RCMP.