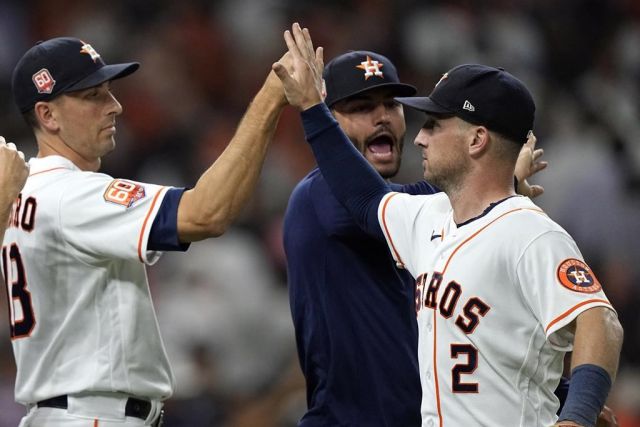 HOUSTON (AP) — Alex Bregman hit a two-run double early and the Houston Astros held on for a 2-1 win over the New York Yankees on Thursday night.

Thursday’s game completes a stretch for the Astros of nine straight games against New York teams. Houston went 3-2 against the major league-leading Yankees and swept four games with the Mets, who had baseball’s second best record before being overtaken by the Astros.

The Yankees were in town for just one game to make up part of a series that was scrapped because of the lockout. They’ll complete the series with a doubleheader here July 21.

Houston starter Luis García (6-5) allowed three hits and one run with six strikeouts in 5 1/3 innings for his third straight win. Ryan Pressly struck out two in a scoreless ninth for his 17th save.

The Astros had a chance to pad the lead, but the third inning ended on an odd play after a malfunction of New York starter Luis Severino’s PitchCom device. Tucker saw Severino was distracted from third base and tried to sneak home, but Severino threw him out.

Severino (4-3) yielded three hits and two runs in six innings. Anthony Rizzo hit a solo homer for the Yankees in the sixth inning.

It was the first multihomer game of Perez’s five-year career. He hit a two-run blast in the fourth inning off Brent Suter (1-2) to break a 3-3 tie, added another two-run homer in the sixth to make it 6-4 then had a solo shot in the eighth to increase the lead to 8-4.

The outburst came one day after the Pirates’ Bryan Reynolds had a three-homer game in a win at Washington.

Rookie Yerry De Los Santos relieved closer David Bednar in the ninth with runners on first and third and retired Luis Urias on a pop fly for his second career save, both coming in the last two days.

José Ramírez drew a leadoff walk, the 10th allowed by Minnesota. Josh Naylor’s groundout moved Ramírez to second and Owen Miller flied out. Giménez followed with his game-winner. The Guardians lead the majors with 17 last at-bats wins, including six against the rival Twins.

The Twins failed to hold a 6-3 lead in the 10th inning on Wednesday night, when the Guardians scored four times and won the game on Naylor’s two-run homer.

Hernández hit his eighth homer in the second, and Espinal went deep in the seventh, his sixth. Both homers came off Rays left-hander Ryan Yarbrough (0-4).

Rays left-hander Jeffrey Springs had been set to start against Toronto on Friday but instead left the team and was put on the Family Medical Emergency List. Rays infielder Isaac Paredes hit a solo homer in the fourth, his 11th.

Kikuchi (3-4) allowed one run and four hits over six innings, his longest outing since his previous win, May 16 against Seattle. He went 0-3 with a 7.30 in the seven starts between victories.

PHILADELPHIA (AP) — Kyle Schwarber finished off the month with another June homer, Darick Hall went deep twice and Philadelphia avoided a three-game sweep with a rout of Atlanta.

Rhys Hoskins and Nick Castellanos also homered for the Phillies, who reached a season high in runs despite missing star Bryce Harper for the fourth straight game. The 2021 NL MVP is out indefinitely after having surgery on his broken left thumb Wednesday.

Adam Duvall and Michael Harris II went deep for the defending champion Braves, who ended June with a 21-6 mark to equal the most victories in a calendar month since the club moved from Milwaukee to Atlanta in 1966.

Aaron Nola (5-5) allowed four runs and seven hits with eight strikeouts and one walk in seven innings. The Phillies pulled away with seven runs and six hits in the second off Ian Anderson (6-5).