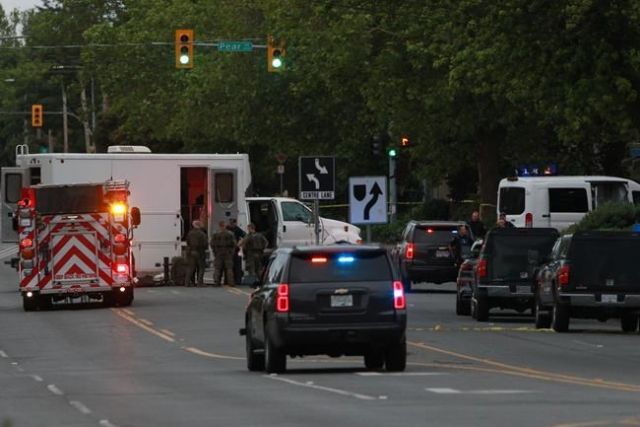 Photo: The Canadian Press
Police officers including a explosive Disposal Unit called in from Vancouver attend the scene of a gunfire incident involving multiple people and injuries in Saanich, B.C., on Tuesday, June 28, 2022. THE CANADIAN PRESS/Chad Hipolito

RCMP have described a vehicle linked with two robbery suspects killed in a shootout with police outside a bank in Saanich, B.C., where six officers were wounded.

He asked anyone who may have seen the vehicle before the robbery on Tuesday to contact police.

The RCMP explosive disposal unit dealt with a highly volatile and dangerous situation, and a number of firearms were found at the site, Bérubé said.

He told a joint news conference with the Saanich Police Department that the coroners service is trying to identify the two male suspects who were killed outside a Bank of Montreal.

"Once that is completed, our first priority will be to speak with the next of kin and then we'll be going forward on determining more about them. I mean their backgrounds, who they are, their history, and how that may relate to what took place."

Saanich Chief Const. Dean Duthie said police happened to be nearby when the armed suspects left the bank.

Duthie said he did not have an update on the three officers who remain in hospital.

Officers who provided emergency first aid to their critically injured colleagues before an ambulance arrived likely helped save their lives, he said.