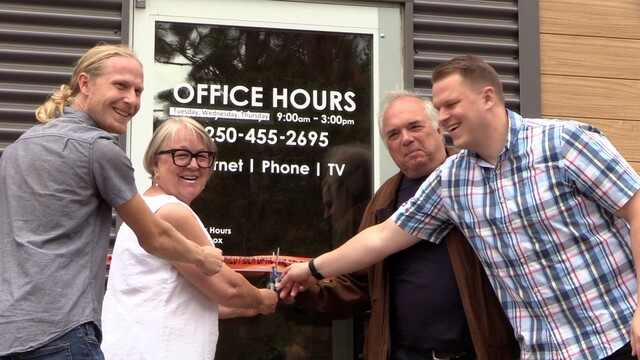 One year after a fire razed most of the Village of Lytton, residents and government officials gathered just south of the town site, celebrating the opening of the first commercial rebuild in the village since that day.

Lyttonnet, a local non-profit providing high-speed Internet access to about 1,000 customers in communities throughout Lytton, Lillooet and Boston Bar, lost its primary office and much of the Lytton fibre optic network in the fire.

On Thursday, the community owned and operated group opened a new office building on a property on Loring Way, minutes away from its former site.

“Not just for our own use as far as an administration location, but I think it's a positive element of hope for the community that something's starting to happen back in the town boundaries,” Mundall said.

“Lytton has been through a lot, people of Lytton have had a lot of hardship. People have been all over the place over this last year, and to see some stuff finally starting to happen here, I think is a really positive thing for a lot of people.”

Mundall said Lyttonnet was an old TV society which was reformatted to service internet about 16 years ago.

“We service a lot of our customers with fibre optics, very much like you'd see from the large providers, but you're in the boondocks — that’s the difference — and you're able to get connectivity like you would have in an urban centre,” Mundall said.

He said the non-profit plans to “rebuild back better than we had before.”

The new office is climate resistant, and the non-profit says it has plans underway to build a climate-proof underground fibre optic network.

“We're working on a 110 kilometre connectivity corridor that will join all of the communities between Boston Bar and Lillooet, including nine Aboriginal communities. And we're very excited about that,” he said.

“Previously, we've been heavily restricted with the kind of capacity we can get in these rural areas, and so being able to open that up kind of a freedom fibre corridor will offer us the ability of servicing the people in this area with much better, faster internet than we've even previously been able to do. And in a climate resilient fashion,” he said.

Mundall said during last fall’s floods, the local group was able to adapt quickly, and was the only provider offering connectivity for 911 services for a number of days.

“It highlights as a local organization, how you're able to adapt to the changing world that is sometimes changing very rapidly, and to be able to fit the needs of the community and really service people when they need it most.”

“To be able to be here and see this lovely new facility built by the community is just such a great symbol of hope,” Vis said.

Jan Polderman, Village of Lytton mayor, said it is significant the community came together and helped construct the Lyttonnet facility.

“[Lyttonnet is] going to be a very important part of the rebuild for Lytton, as we're looking to become a remote worker community,” Polderman said.

“In order to do that we need high speed internet. And we're very fortunate to have Lyttonnet. … I’m looking forward to many more years of good service.”

Tegart said Lyttonnet is innovative and visionary, run by a non-profit board comprised of local residents.

“Their team lives here. So they love where they live, and they want to serve. And so to see the building built by volunteers, to see the opening today is pretty exciting,” Tegart said.

“I think that this is one of the first steps in the rebuild of Lytton. We've been waiting a long time. And it's been pretty frustrating. But good news today. Lyttonnet is open, the ribbon is cut, and they are ready to go on the rebuild for the people of Lytton and the area.”