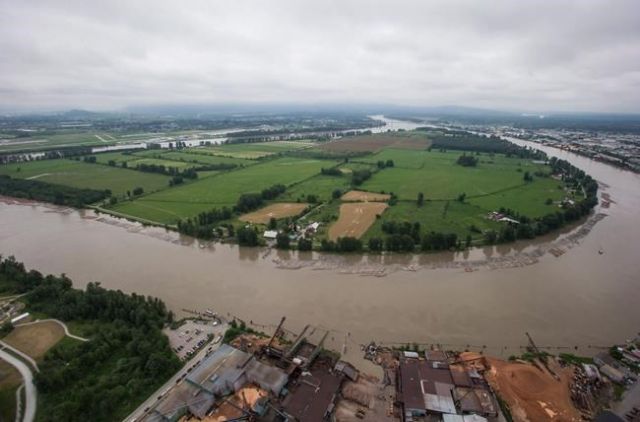 Photo: The Canadian Press
An evacuation alert has been issued for a small island along British Columbia's Fraser River because of swelling waters from rains and snowmelt. Metro Vancouver has issued an evacuation alert for Barnston Island, which has a population of about 150 people. The island, under an evacuation alert due to potential flooding, is seen in an aerial view along the Fraser river, in Surrey, B.C., on Wednesday May 16, 2018. THE CANADIAN PRESS/Darryl Dyck

An evacuation alert has been issued for a small island along British Columbia's Fraser River due to possible flooding from swelling waters after rainfall and snowmelt.

Metro Vancouver has issued the alert for Barnston Island, home to about 150 people.

It says in a statement the evacuation alert is a precautionary measure, which means residents are not required to leave but should be prepared to do so at short notice.

Metro Vancouver says a local state of emergency has been declared to restrict access to the island in case residents must evacuate, while Barnston Island Regional Park is closed.

The BC River Forecast Centre has issued a flood watch for the Upper Fraser River including areas from Prince George and upstream tributaries through the Robson Valley and the McGregor River.

It is maintaining a high streamflow advisory for West Road River including tributaries and streams around Nazko.

The centre says rapid snowmelt earlier this week, combined with up to 40 millimetres of rain, has contributed to increased runoff and rising flows through the region.