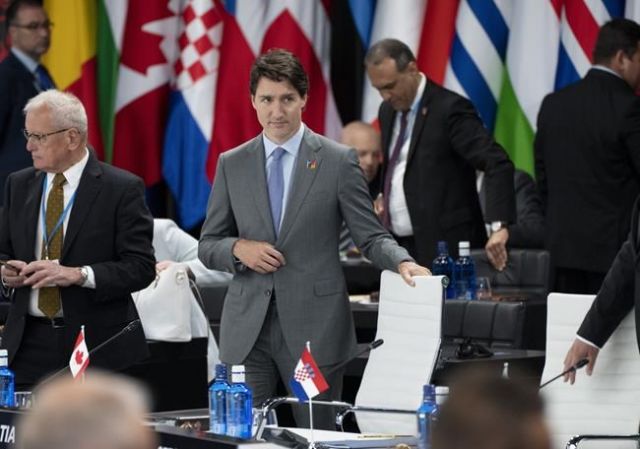 Canada will be sending more troops to Latvia as part of a pledge to upgrade and strengthen the NATO battlegroup it is leading there, Prime Minister Justin Trudeau said on Thursday.

The Canadian-led NATO battlegroup is made up of about 2,000 troops, including 700 Canadians, and is one of eight such units based in eastern Europe designed to deter and defend against any Russian invasion.

Canada signed an agreement on the sidelines of a major NATO summit on Wednesday to upgrade the battlegroup to a brigade, which entails adding more troops and equipment to bolster its ability to fight.

But while Defence Minister Anita Anand said at the time that it was too early to confirm whether Canada would deploy more members of the Armed Forces, Trudeau committed during a closing news conference on Thursday to doing just that.

The prime minister stopped short, however, of giving an expected number.

Trudeau's attendance at the NATO summit capped a nine-day trip that included previous stops in Rwanda and Germany for the Commonwealth heads of government meeting and G7 and was heavily focused on Russia's war in Ukraine.

To that end, the prime minister on Thursday announced more military equipment for Ukraine, saying Canada is in the final stages of talks to supply Ukraine with up to 39 armoured combat support vehicles to help it fight off Russia.

He also pledged to give Ukraine six Canadian-made drone cameras, to complement the roughly 50 cameras sent earlier this year.

Trudeau said his government's decision to send drone cameras and armoured combat vehicles was based on conversations with Ukrainian President Volodymyr Zelenskyy and his government's ministers who asked for these types of military equipment.

"These exceptional cameras built in Canada that go into drones have been incredibly useful in protecting Ukrainians and pushing back against Russia's illegal invasion," Trudeau said. "The light armored vehicles that we will be sending over will be extremely effective as well."

The planned equipment purchase means Canada is on track to have spent the $500 million set aside in the 2022 budget for military support for Ukraine.

The prime minister also confirmed that a new NATO centre of excellence for climate change and security will be located in Montreal, and that Canada plans to host the North American office for a network of NATO innovation hubs called the Defence Innovation Accelerator for the North Atlantic (DIANA).

"Russia's illegible, unjustifiable and horrific invasion of Ukraine requires us all to stand together," said Trudeau. "That was very, very clear from this meeting here in Madrid that all of us have already committed to being there to support Ukraine because they are fighting not just for their own territory but our democracies."

The prime minister also said Canada will take part in the G20 summit expected to take place in Bali in November, even if Russian President Vladimir Putin goes too.

Trudeau said he expects all G7 countries, which also includes the United States, the United Kingdom, France, Germany, Italy and Japan, to take part even if Russia remains a full-fledged member of the G20.

He says the conversations about the global economy that will take place at the G20 summit are "too important," and Canada needs to counteract the voice that Russia will have around that table.

"It’s too important that we be there to counteract the voice and the lies that Russia will perhaps be putting forward," Trudeau said.

"There is a number of months still to go before that, and anything can happen."