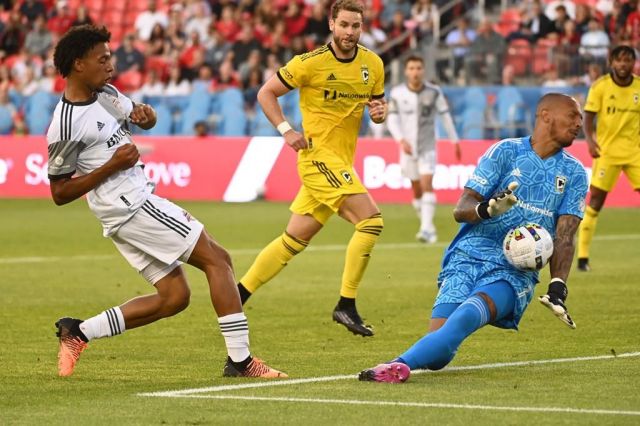 Sean Zawadzki, in just his second MLS game, and Darlington Nagbe scored for Columbus, which led 2-0 after 30 minutes.

Toronto, with Spanish playmaker Alejandro Pozuelo pulling the strings, had plenty of possession and chances but failed to convert until Jesus Jimenez scored in the 54th minute.

Columbus (5-5-6) pulled men behind the ball to protect the lead as Toronto kept attacking.

Toronto (5-9-3) came into the game having lost just one of its last seven outings (4-1-2) in all competitions with reinforcements on hand. Italian star forward Lorenzo Insigne and veteran defender Domenico Criscito await the MLS secondary transfer window opening July 7 to take the field for TFC. Both were in the stands Wednesday.

Russell-Rowe signed a first team deal with Columbus earlier Wednesday after leading the MLS Next Pro League with 11 goals for Crew 2. He had seen just 34 minutes of MLS action prior to Wednesday, making two substitute appearances earlier this month on a short-term loan from Crew 2.

And the 19-year-old native of Brampton, Ont., played his part in the opening goal, teeing the ball up for Zawadzki who hammered a left-footed shot from outside the penalty box high into the goal past Alex Bono in the 18th minute. It was a first MLS goal for Zawadzki, a former Crew academy product who played collegiate soccer at Georgetown.

Russell-Rowe picked up another assist in the 30th minute, feeding Nagbe on a rapid-fire counterattack that saw the Crew cut through the Toronto defence like butter. The Nagbe goal — his third of the season — came one minute after Curaçao international 'keeper Eloy Room made a fine stop to deny Kosi Thompson after a Pozuelo pass carved open the Columbus backline.

Jimenez pulled one back for Toronto in the 54th minute, rising high to head home a perfect Pozuelo cross for his eighth goal of the season. Russell-Rowe exited in the 66th minute after an impressive return home.

Toronto captain Michael Bradley had a good chance after a Columbus turnover in the 77th minute but fired wide. Pozuelo was also just off-target in the 85th and Toronto came close in stoppage time on a free kick that Columbus had trouble dealing with.

Toronto, in the midst of a five-game homestand, had won two straight at home but saw its record at BMO Field drop to 5-4-0 this season compared to 0-5-3 on the road. TFC’s previous eight MLS wins, dating back to September, have all come at home, as have 26 of the 31 points the team earned over that period.

While Columbus arrived unbeaten in its last three matches (1-0-2), the injury-riddled Crew had dug themselves a hole following a 2-0-2 start to the season that included a 2-1 victory over visiting Toronto. Columbus had just one win in its previous six league outings (1-2-3).

Prior to Wednesday, 10 of Columbus’ 18 goals this season came in the first four games. Coming off a pair of ties, the Crew had managed just three goals in their last five outings (1-2-2).

Bono returned in goal for Toronto, replacing Quentin Westberg who was involved in a jarring collision in Saturday's 2-1 win over Atlanta. Bono started the first 13 league games this season before giving way to Westberg.

Mexican defender Carlos Salcedo, who like Westberg did not train Tuesday, was also missing.

Star attacking midfielder Lucas Zelarayan, an Argentine-born designated player who represents Armenia internationally, returned to the Columbus lineup for the first time since May 21.

Columbus was without Brazil’s Artur and Erik Hurtado. Derrick Etienne Jr., and Kevin Molino started on the bench after injury absences. Zelarayan lasted 59 minutes before he was replaced by Etienne.

Zelarayan, Etienne and Hurtado had accounted for 10 of the Crew’s 18 league goals prior to Wednesday.

Hoping to help spark the offence, Columbus has signed 23-year-old Colombian forward Cucho Hernandez as a young designated player from England’s Watford. Hernandez is slated to be introduced in Columbus on Friday.

Toronto had a bright start with Thompson forcing a save from Room in the second minute. Russell-Rowe came close for Columbus in the sixth minute, sliding a low shot just wide of the goalpost.

Room made several good stops in the early going, including a save on Thompson after a Pozuelo pass carved open the Columbus defence in the 29th minute. Toronto had 60.4 per cent possession in the first half, outshooting the Crew 9-7 (5-3 in shots on target).

TFC brought on Deandre Kerr and Osorio to open the second half, replacing Ayo Akinola and Ralph Priso. Akinola had a team-low 11 touches in the first half.

This report by The Canadian Press was first published June 29, 2022