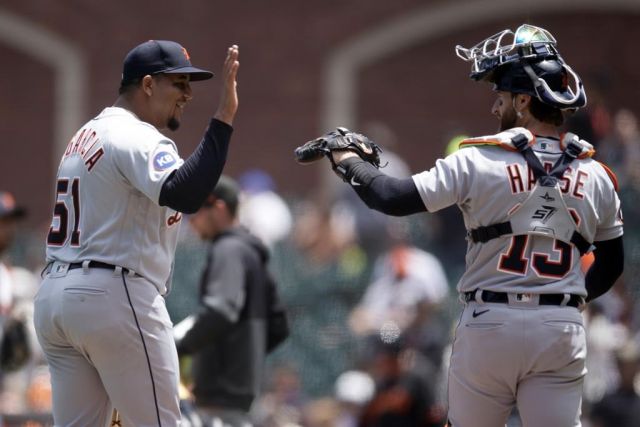 SAN FRANCISCO (AP) — Eric Haase hit a two-run homer to break a 1-all tie in the sixth inning and the Detroit Tigers held on to beat the San Francisco Giants 3-2 on Wednesday.

It was Haase’s fifth home run of the season and his second in the last three games. Miguel Cabrera also drove in a run for the Tigers, who improved their league-worst road record to 11-23 and split the two-game series.

Rony García (3-2) won his third consecutive start for Detroit, allowing one run on four hits with four strikeouts in five innings. Gregory Soto pitched a perfect ninth for his 15th save in 17 opportunities.

Evan Longoria had a first-inning home run for the Giants, his eighth of the year, but San Francisco couldn't capitalize on late-inning chances to tie the game.

Down 3-1 in the seventh, the Giants loaded the bases with one out. Mike Yastrzemski grounded into a fielder’s choice, allowing Tommy La Stella to score and cut the deficit to one. After a walk to Longoria loaded the bases again, Austin Slater struck out on three pitches.

In the eighth, La Stella doubled to left with two outs, but Wilmer Flores grounded out to third to end the inning. Overall, the Giants left nine runners on base.

Tigers: RHP Michael Pineda (fractured right middle finger) is expected to come off the injured list and start Friday against Kansas City. “We’re not gonna make anything official until likely Friday morning,” manager A.J. Hinch said. “He’s penciled in. That’s about as far as we need to take it.”

The Giants optioned IF/C Yermín Mercedes to Triple-A Sacramento to make room for Wade on the active roster.