Robbery witness: 'In the doorway is standing a guy and he is carrying an assault rifle' 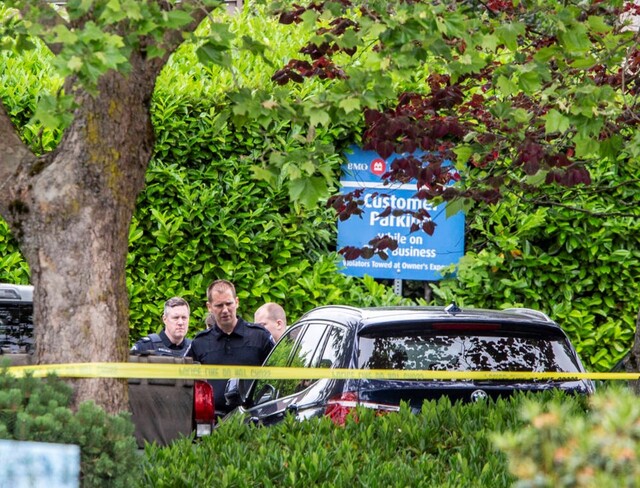 Shelli Fryer had been sitting in the manager’s office in the Bank of Montreal branch on Saanich's Shelbourne Street for just a few minutes Tuesday morning when she heard an “incredible explosion.”

She said the manager remained calm and said to her: “We are being robbed.”

“I look out the door and I can see that all the tellers are all on the ground.”

The 59-year-old Langford woman dropped to the floor to hide behind a chair and then looked up. “In the doorway is standing a guy and he is carrying an assault rifle.”

The man wore a balaclava on his head, Fryer said Wednesday.

In the bank, there was “completely dead silence. There’s not a word. There’s no alarms going off. Nobody is speaking. Silent.”

The man with the gun remained standing in the doorway just outside the office, she said.

“I’m kind of trying to halfway crouch behind my chair just looking up at him. He’s just standing there looking at me.”

When the two left together, Fryer dialed 911 and left the line open, “praying they wouldn’t talk” and fearing her voice would be heard within the quiet building.

“I was frightened out of my mind … I didn’t want to be caught with the cellphone.”

Fryer said she heard voices telling people in the bank to get up. Everyone else headed for the back of the building, she said, while Fryer remained crouched behind the chair in the office.

Fryer said he then caught a glimpse of her. “He turned and faced me and just motioned to me with his hand to move.”

She tried to hide her cellphone behind her skirt, but ended up leaving it in the manager’s office with the line to 911 still open.

Fryer followed the armed man and joined the others. “Everybody was standing lined up on either side of the hallway at the back of the bank.

While staff and customers were lined up together, shooting broke out, she said.

“We were unable to see anything at all. Ever. [Then] the police announced themselves and the shooting started [and there was] a hail of gunfire.”

As others ran to the file room, Fryer said she hid in an area by the safety deposit boxes.

Eventually, the 20-plus people who had been trapped inside the bank were led outside by police into a waiting B.C. Transit bus.

Fryer said when she saw the amount of police presence when they walked us across the road, she felt safe.

She said she told each officer: “Thank you so much.”

The walk to the bus was “surreal. It was like a movie,” she said

Fryer said she and others in the bank had no idea what had happened. It was only later in the day that she saw video of police approaching the bank and learned that officers had been injured.

“They were rushing toward the gunfire when most people turn away and they were doing what they were trained to do to come and save us,” she said. “I am so grateful, I can’t even tell you and it’s beyond words. I’m heartbroken that officers have been injured in this.

“They all acted calmly with us, professionally. They weren’t frenetic … They did not give anything away with their demeanour. We couldn’t see anything outside. We were never exposed to anything.

On the bus, the bank customers were told not to look at social media so it did not affect their memories, she said.

They were taken to the Victoria police department for recorded interviews.

Fryer said she was overwhelmed by the kindness of the officers and others they dealt with.

One officer in Victoria made sure she had her purse and cellphone, which she had left in the manager’s office. Her SUV remained in the parking lot by the bank because police continued to investigate.

A special constable offered to drive Fryer home to Langford but her son picked her up at the station.

Fryer said she does not understand the robbers’ behaviour. “They waited around in there. They were quiet. They were calm. They just had a country stroll.”