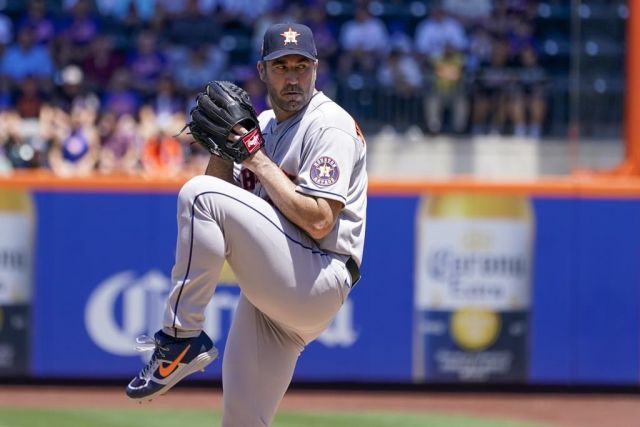 Astros left fielder Yordan Álvarez and shortstop Jeremy Peña were hurt when they collided in the eighth while running down Dominic Smith’s popup. Both called for the ball and as Peña caught the pop, and they hit each other in the face with their gloves. Álvarez was removed on a cart, sitting up, and Peña walked back to the dugout during the eight-minute delay.

Verlander (10-3) became the majors’ first 10-game winner, striking out six and walking one. Ryan Pressly pitched a perfect ninth for his 16th save in 19 chances.

Reynolds hit a two-run homer in the first inning off Paolo Espino and a solo drive in the sixth off Carl Edwards Jr. (2-2).

Edwards exited with two runners on base in the seventh, giving way to Kyle Finnegan.

After Ke’Bryan Hayes struck out, Reynolds launched Finnegan’s elevated sinker into the visitors’ bullpen in left-center for a three-run homer that put the Pirates up 8-6.

The Yankees completed a three-game sweep of baseball’s worst team and improved to 56-20, matching the 2001 Mariners and 1998 Yankees for baseball’s best 76-game start since 1930.

New York's Jameson Taillon gave up three runs in the first inning, but Judge countered with a two-run drive in the first and Stanton hit a three-run homer in the third against Cole Irvin (2-6).

The Yankees are 25-1 when Judge and Stanton homer in the same game, including 9-0 this season.

Taillon (9-1) grinded through five innings, and Clay Holmes pitched the ninth for his 14th save to end a seven-game homestand.

Tellez hit his 15th homer, a tiebreaking solo drive in the eighth inning against Calvin Faucher (1-2). The ball struck the outer C-ring of the catwalk at Tropicana Field.

In the second, Tellez homered to deep center off opener Jalen Beeks.

Davis robbed Randy Arozarena of an extra-base hit in the second when he made a flying, over-the-shoulder catch while crashing headfirst into the wall. He stayed down for several minutes holding his back and initially stayed in the game before leaving with lower back and rib cage discomfort.

Luis Urías and Jace Peterson also homered for Milwaukee. Brad Boxberger (2-1) got the win, and Josh Hader earned his 24th save.

Kansas City’s Kyle Isbel provided the winning cushion with his second home run in as many games.

Greinke (2-4) is the 48th pitcher in major league history to start 500 games, and the only active pitcher to reach that milestone. Scott Barlow worked a perfect ninth for his 10th save in 12 chances.