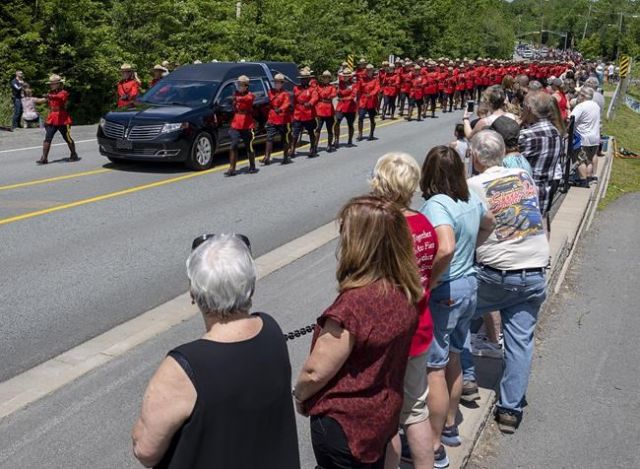 Photo: The Canadian Press
RCMP members escort the hearse at a regimental memorial service for Const. Heidi Stevenson in Dartmouth on Wednesday, June 29, 2022. Stevenson was killed, in the line of duty, along with 21 others during the April 2020 mass murders in rural Nova Scotia. THE CANADIAN PRESS/Andrew Vaughan

An RCMP officer who was among 22 people killed in the 2020 Nova Scotia mass shooting was remembered today during a regimental service in Halifax that recalled her brave actions.

People lined a street leading to the service for Const. Heidi Stevenson, watching as Mounties and municipal police marched, bagpipers and drummers played, and a hearse brought the officer's urn to the ceremony at the Cole Harbour hockey arena.

COVID-19 restrictions had delayed the official ceremony, though a family funeral took place five days after Stevenson was killed.

RCMP Commissioner Brenda Lucki told today's service that Stevenson would be remembered for "her courage and strength of character."

She said the force will remember her "heroism that day and the bravery she demonstrated and the actions she took to protect the community she cared so deeply about."

A public inquiry into the mass shooting has indicated that the veteran officer was racing to support an injured colleague on April 19, 2020, when the fatal encounter occurred on a highway interchange about 60 kilometres north of Halifax.

The 48-year-old officer died in a gunfight with the killer, who had jumped a lane of traffic in his replica police vehicle in order to drive the wrong way down a ramp and slam into Stevenson's cruiser.

Public inquiry documents say bullet fragments from Stevenson's pistol "likely" struck the killer's head, and — about 35 minutes later — blood on his forehead tipped off an officer who shot and killed the gunman at a gas station.

The inquiry has also noted that Stevenson had at 8:44 a.m. that morning called for the public to be notified about the killer driving a replica RCMP vehicle. Her request never received a response.

During the service, four friends of the officer noted her strong personality and sense of justice.

Her longtime friend Angela McKnight described Stevenson as a "fierce woman" who chose the RCMP over kinesiology and developed physical strength through playing rugby at university.

"Heidi surrounded herself with strong women focused on supporting each other," she said. "I know no better... no tougher, more determined woman than her."

Those watching the procession to the service also described their admiration for Stevenson, who is survived by her husband and two children.

Randy Stevenson, a military veteran, and Jan Hill, whose husband had worked with the constable, were among those waiting on the sidewalk for the procession.

The veteran, who is not related to the fallen Mountie, described her as exemplifying "what the police and the military are about," while Hill praised the officer's deep involvement in her community of Dartmouth, N.S.

The officer grew up in Antigonish, N.S., and attended university in Nova Scotia. She was with the Mounties for 23 years, developing expertise in drug recognition, general duty policing and communications. She also spent time in Ottawa as part of the RCMP musical ride, even though she had no previous experience with horses.

In a statement provided to the inquiry, the Stevenson family said community support was helpful following her killing. "There were months of meals provided and seeing the Nova Scotia Strong stickers on everyone's car meant so much. The phone call from the Prime Minister was very personal," the family said in their statement.