Fighting to stay in Canada 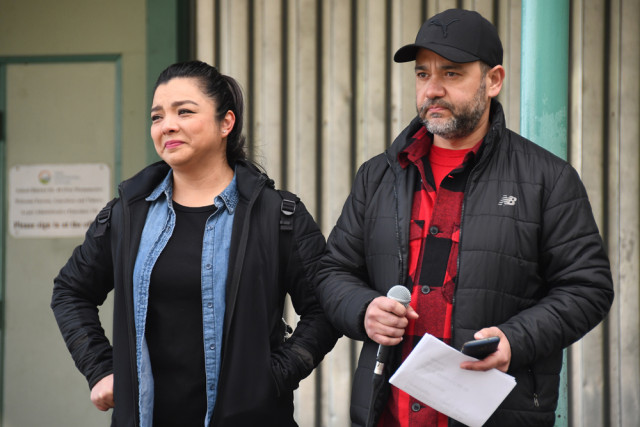 A New Westminster couple facing deportation to Mexico have won a temporary reprieve — but their fight to stay in Canada continues.

Adriana Rosales Contreras and Alberto Vargas Mendez have been fighting to remain in Canada since Nov. 30, 2021, when Contreras was apprehended by Canada Border Services Agency (CBSA) officers. They grabbed Contreras on the street shortly after she dropped the couple's daughter, Sofia, off for kindergarten at École Tweedsmuir Elementary School.

They were facing a deportation order effective July 8, despite the fact that they have applied for permanent residence in Canada on humanitarian and compassionate grounds.

On Monday, they learned that the July 8 order has been deferred until after a decision is made on those applications.

"That is a huge relief, but it does not mean they can stay permanently," said Omar Chu of Sanctuary Health, a grassroots organization dedicated to helping people with precarious immigration status that has been campaigning on behalf of the couple. "If their application for permanent residence on humanitarian and compassionate grounds is granted, they will be able to stay. If it is rejected, removal proceedings will begin once again."

Sanctuary Health credits public pressure, including rallies and a letter-writing campaign, for the latest news.

"Thank you to everybody who attended a rally, sent a letter to the Ministers and made a phone call to their MP; we are positive that this decision was due to your hard work as a community," the organization said in a Facebook post.

The group is calling on people to keep the pressure on federal officials by writing to Immigration Minister Sean Fraser to ask him to grant the couple permanent residence in Canada.

Adding to the urgency of the situation is the fact that Mendez has ankylosing spondylitis, a progressive and painful form of arthritis that requires specific medications and treatment.

Sanctuary Health notes that if this disease is not treated correctly, Mendez could be completely immobile, affecting the whole family, who depends on him. His doctor has told immigration that “it would not be ethical to remove him without a clear and verifiable plan for the continuity of his medical treatment," Sanctuary Health says.

The couple's story is a complicated one. It began more than a decade ago, when they first arrived in Canada as refugees.

The couple’s application for refugee status in Canada was heard at the Immigration and Refugee Board by a tribunal member who was himself a former CBSA officer, according to Sanctuary Health.

Chu said the board member agreed the couple faced real risk if they were to stay in Mexico, where they said they faced “involuntary recruitment” into organized crime. But the IRB said that, because the same risk was true of many people in their home country, Contreras and Mendez were not in need of specific protection.

The couple did not have a lawyer at the time and, Chu said, did not understand how to appeal the decision.

In August 2021, the couple applied for permanent residence in Canada on humanitarian and compassionate grounds, but the application sat unopened until November 2021. At that point, Chu said, the government returned the application because the forms had since become out of date — but the family did not learn of that fact until after Contreras had been handcuffed on her way home from her daughter’s school.

The couple then resubmitted their application.

Sanctuary Health is working with the Migrant Rights Network to fight for a regularization program that would help families like Mendez and Conteras so they don't end up in the same position.

"It should not take this immense amount of effort in order to get the right decision for just one family," said Sanctuary Health's Facebook post