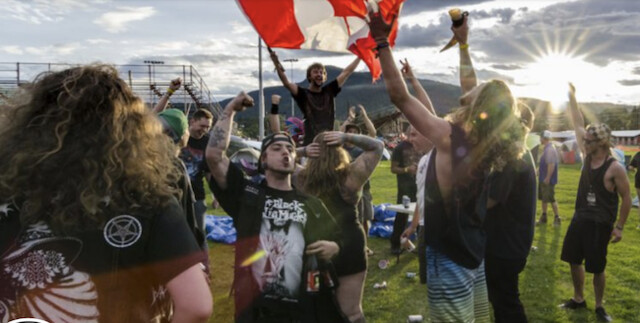 The most extreme concert experience in the Okanagan is only a couple of weeks away.

The 12th edition of the Armstrong Metalfest takes place July 15-16 at the IPE grounds and Hassen Arena.

“The lineup also sees Vancouver’s cult-loved pyromaniacs Zimmers Hole performing for the first time at AMF along with the return of festival alumni progressive death kings Neck of the Woods,” says Asher.

“Presenting a very special performance for this year’s lineup is Kelowna’s Omnia Nihil (formerly Apollyon) in memory of beloved vocalist Matt Depper, who suddenly passed away this January.”

Other Okanagan bands on the bill include Salmon Arm's Sinitry as well as Kelowna's Eden Echo, Naitaka, Planetkiller, Kronikill and Pharm.

Like so many other events, Metalfest was put on pause for 2020-21 due to COVID restrictions.

"We are so very pleased to present the 2022 lineup. It's pretty much the 2020 lineup, just two years later. We decided it was only fair to offer everyone the invitation back since COVID took the first one. Speaking of which, we are honouring all tickets sold for 2020 for the 2022 event – if that doesn't work for you, you can claim it in 2023 or 2024. This is the overall biggest lineup we've ever put together. It's going to be wild. We are looking forward to seeing the gang back together again, two years of extra wrinkles and all,” Metalfest organizers said in a press release.

Camping is also available for the event.

For more information and to purchase tickets, click here.