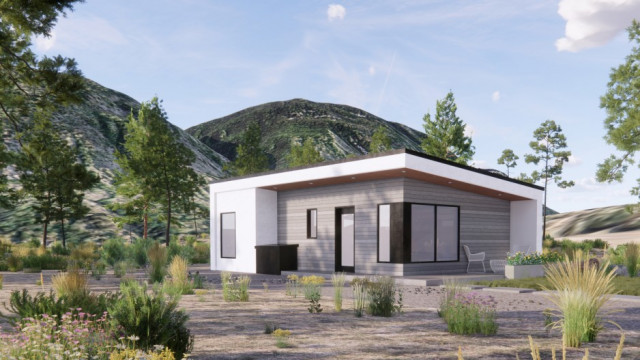 Photo: Submitted.
Artist's rendering of one of the Nexii homes to be built in Lytton.

Two of the first homes to be rebuilt in Lytton – razed by fire last year – will be built by Nexii, the B.C.-based company that developed a low-cost, low-carbon, fire-resistant alternative to wood, concrete and steel construction.

Nexii Building Solutions Inc. will build two new homes in Lytton using its proprietary Nexiite system. One home will be built for a member of the Lytton First Nation, and the other for a Lytton Village councillor.

The funding for the rebuilds will come from Canada Mortgage and Housing Corporation under the National Housing Strategy Demonstration Initiative, with contributions also coming from BC Housing.

The rebuilding project is being led by the SAFERhome Standards Society, with contributions from Levven Technologies, and Western Forest Products, which is donating mass timber for the roof structure of the homes.

Nexiite is a polymer concrete that is resistant to fire, water and pests, highly insulating and has a lower embedded and operational carbon intensity than concrete and steel.

Buildings made from Nexiite are pre-fabricated and assembled on site. The two Lytton homes will be fabricated at Nexii’s plant in Squamish, with the homes expected to be assembled later this year.

The village of Lytton was ravaged by wildfire on June 30 last year. Nearly all the homes in Lytton were destroyed. Efforts are underway to rebuild homes there with climate change adaptation in mind, including fire resistance.