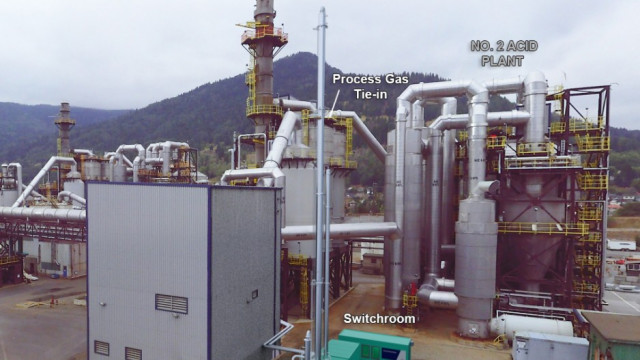 Photo: Teck.
Pilot project will capture up to 3 tonnes of CO2 per day.

The pilot plant would capture CO2 from the smelter’s flue gas at an estimated 3 tonnes per day.

One of the challenges of any carbon capture project is what to do with the CO2 once captured – find a market or use for it, or sequester it, which requires burying the CO2 deep underground.

It appears Teck hasn’t quite decided what it would do with the captured CO2 yet. That is to be worked out during the piloting phase.

“The pilot project will also evaluate options for the utilization and/or storage of the captured CO2 at Trail Operations,” the company said in a news release.

“If successful, the project could be scaled up to an industrial CCUS plant with the potential to capture over 100,000 tonnes of CO2 per year at Trail Operations, the equivalent emissions of more than 20,000 cars.”

The carbon capture project is just one of several initiatives the company is undertaking to lower its carbon intensity. The company has set a goal of reducing operational greenhouse gas emissions by 33% by 2030. Teck didn't say how much the project will cost of how much it will receive from the CleanBC Industry Fund.

To date,Teck has received more than $2.5 million in funding the CleanBC Industry Fund for five other emission reductions initiatives, including pilot projects replace diesel buses and haul trucks with zero emission vehicles.

“This carbon capture pilot is an important step towards our knowledge building for the application of carbon capture, utilization and storage as an emissions reduction solution, as we work to evaluate pathways to reduce greenhouse gas emissions across our operations and achieve our net-zero goal,” Teck CEO Don Lindsay said in a press release.

“The pilot also provides us with a technical platform to assist our steelmaking coal customers in materially reducing the carbon intensity of their steel production.”

Teck expects the new carbon capture system to be in operation by the second half of 2023.