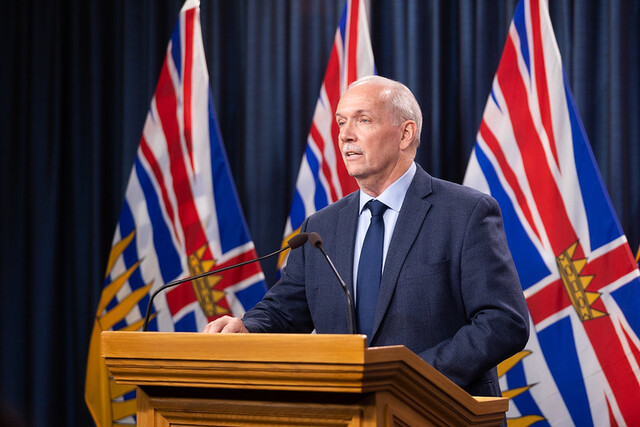 B.C. Premier John Horgan, the first two-term NDP leader of the province, has announced he will not run in the next election and there will be a leadership convention in the fall to select a new party leader.

Horgan made the announcement Tuesday after a two-day cabinet retreat in Vancouver, saying it’s traditional to reflect on the future at the halfway point of a term, and after two bouts of cancer — throat cancer in 2021 and bladder cancer in 2008 — he is tired.

After talking to his wife, Ellie, and his colleagues, Horgan said, he came to the conclusion that he’s “not able to make another six-year commitment to this job.”

He said he has asked the president of the B.C. NDP to work with the party’s governing body and executive to select a fall date for a leadership convention.

“This has been the thrill of my life to be the premier of British Columbia,” said Horgan, noting there has been “endless speculation” about his future as a result of his recent battle with cancer .

“I want to put the speculation to rest so we can get back to what really matters and that’s the issues before British Columbia, and this has never been about me.”

The premier said he’s cancer-free, but likely returned to work too soon after completing radiation treatments in January.

“I probably got back a bit earlier than I should have,” said Horgan. “But it doesn’t change the fact that I’m going to be 63 this summer and I’ve been involved in public life working in government for 36 years, I’ve been an MLA for 17 and I’ve been leader at the NDP for eight and premier for five.”

Horgan said he’s long talked about the need for generational change in politics. He said he had every intention of carrying on through next election, but the cancer diagnosis, surgery and treatment was rigorous.

Last week, he announced that he was stopping plans for a new $789-million Royal B.C. Museum in Victoria, taking responsibility for making the wrong call. He also faced declining approval ratings.

Horgan said Tuesday there is “no connection” beyond cancelling the museum rebuild and his decision not to run again. He said he loves the museum and didn’t want it to become “a political football.”

He is the first B.C. premier in 36 years to step away from office without facing an internal revolt, deal-breaking scandal or facing defeat.

Being the Premier of BC is not a job I ever expected, but it’s been the honour of my life.

Having just beat a second round of cancer, I’ve made the tough call not to run in the next election.

By working together and caring for each other, we've accomplished a lot. Thank you. pic.twitter.com/L1svGi4JEW

CTV News is reporting that Premier John Horgan will announce his retirement today.

Horgan has scheduled a news conference for 1:30 p.m., coming after he fuelled speculation about his future in an interview with the CBC last week.

“I have a cabinet retreat in Vancouver and we'll be plotting and planning and preparing for the next two years, so I'll have more to say about that as we come out of those meetings,” Horgan told CBC Victoria host Gregor Craigie when asked about his plans.

Horgan recently had a second fight with cancer, undergoing 35 treatments over the winter, before returning to work in February.

Castanet will carry the news conference live in this story.