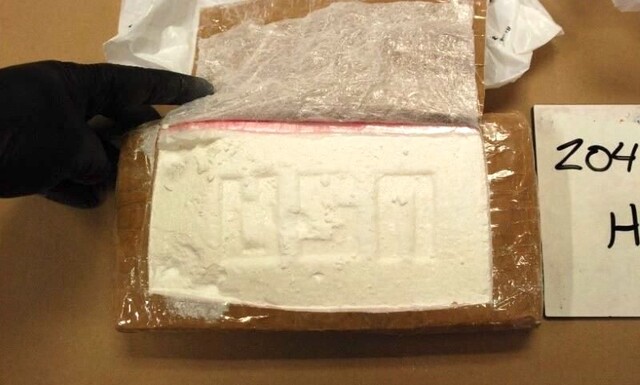 Photo: RCMP
Police said this photo shows some of the drugs seized in connection with the investigation into Roberto Lupi.

Police used a covert tracking device hidden on an SUV belonging to a Kamloops drug dealer to seize three kilograms of cocaine and two kilograms of crystal meth.

That’s what a B.C. Supreme Court judge was told on Monday as Roberto Silio Lupi, 36, pleaded guilty to two counts of possession for the purpose of trafficking.

Lupi was among a group of five alleged Kamloops-area drug dealers charged in connection with a lengthy police investigation into drug trafficking in the city.

Federal Crown prosecutor Tareyn Warren said police were monitoring Lupi’s movements in the summer of 2020 after hiding a tracking device on his Hyundai Santa Fe SUV.

On Aug. 13, Warren said, police watched as Lupi drove to a New Westminster parking lot to meet up with another alleged drug trafficker, where the two men exchanged packages.

Mounties were again watching on Sept. 4, when Lupi met the same alleged drug dealer in another New Westminster parking lot.

This time, he was pulled over near Merritt while returning home. Police seized two kilograms of cocaine, a small amount of cash and two cellphones from his vehicle — and they used that seizure to get a warrant for his Aberdeen home.

At the house, investigators turned up another kilogram of cocaine and two kilograms of meth hidden inside a hockey bag in the garage. Police also found a large scale, more cellphones and a money counter.

Warren said one of the cellphones seized from Lupi’s vehicle was analyzed and “illustrated that he was actively engaged in drug trafficking at the time of the offence.”

Lupi’s defence lawyer is seeking a number of pre-sentence reports, which will be completed in the coming weeks.

Lawyers will return to court to set a date for Lupi’s sentencing on July 25. He remains free on bail.