Canada in talks with NATO 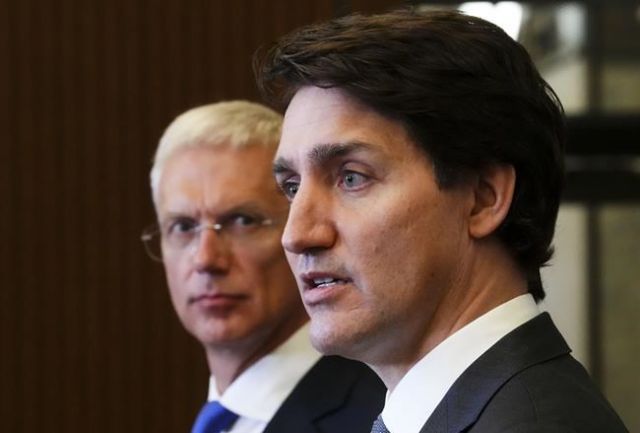 Photo: The Canadian Press
Prime Minister Justin Trudeau takes part in a joint press conference with Latvian Prime Minister Krisjanis Karins on Parliament Hill in Ottawa on Thursday, May 12, 2022. Ottawa is talking with allies about boosting a Canadian-led combat unit in Latvia as the NATO military alliance moves to reinforce its eastern front with Russia.THE CANADIAN PRESS/Sean Kilpatrick

Ottawa is talking with allies about boosting a Canadian-led combat unit in Latvia as the NATO military alliance moves to reinforce its eastern front with Russia.

Latvia's ambassador to Canada revealed the discussions in an interview with The Canadian Press today as Prime Minister Justin Trudeau prepares to attend a NATO summit where Russia and its invasion of Ukraine will be top of mind.

Kaspars Ozolins says the aim is to add more troops and capabilities to the 2,000-strong battlegroup that Canada has been leading in Latvia since 2017, which will serve as a deterrent to further Russian aggression in the region.

The battlegroup in Latvia is one of four NATO created in 2017. Germany leads another such unit in Lithuania, Britain heads one up in Estonia and the U.S. is responsible for forces in Poland.

NATO secretary-general Jens Stoltenberg confirmed today that the four battlegroups will be increased to brigade-level forces, which entails doubling the number of troops assigned to each.

Germany and Britain have both recently saidthey are ready to lead larger combat units in Lithuania and Estonia, and Ozolins is hoping Canada will announce something similar during this week's NATO summit in Spain.