Shot at by strangers

Penticton RCMP confirm they are investigating a disturbing incident in which a group of pedestrians was assaulted and shot at in a residential neighbourhood near downtown.

On June 26 around 2 a.m., the group was leaving a social event when they were approached by a man they did not know. He singled out one of the men in the group and began to attack him.

One of the other men in the group attempted to protect his friend, and as that assault unfolded, another strange male approached and pulled out a handgun.

He began firing "several indiscriminate shots," according to police, and the men ran away unscathed, captured on surveillance video by a neighbour.

"Miraculously, no one was seriously harmed as a result of this alarming incident,” says RCMP Cst. James Grandy.

“The group were visiting from out of town, and none were allegedly acquainted with either suspect. This appears to be a non-targeted altercation with an unknown motive."

RCMP are now seeking two suspects. The first is described as Short, dark complexion, wearing a dark hooded sweater with the hood pulled down over his face. The second is taller, stocky, wearing a white t-shirt.

“Penticton’s General Investigations Unit has assumed conduct of this investigation, and are conducting witness interviews and canvassing for video surveillance. We’re encouraging anyone with information to speak with us by calling the non-emergency line at 250-492-4300,” says Grandy.

At 1:48 a.m. Sunday, Steve Richmond's camera captured what sounds like multiple gunshots, and a group of what may be young men fleeing down the road at the corner of Wade Avenue and Van Horne Street.

In the video, shared by Castanet with permission from Richmond, the men are heard yelling "What the f***" and other indiscriminate shouting as they sprint away from the sounds.

Richmond told Castanet his home wasn't damaged, but said his neighbour found what appeared to be bullet damage to her barbecue. Just above that barbecue, he said, is the room in that house where the woman was trying to soothe a newborn baby.

Castanet is awaiting information from the RCMP and will update. 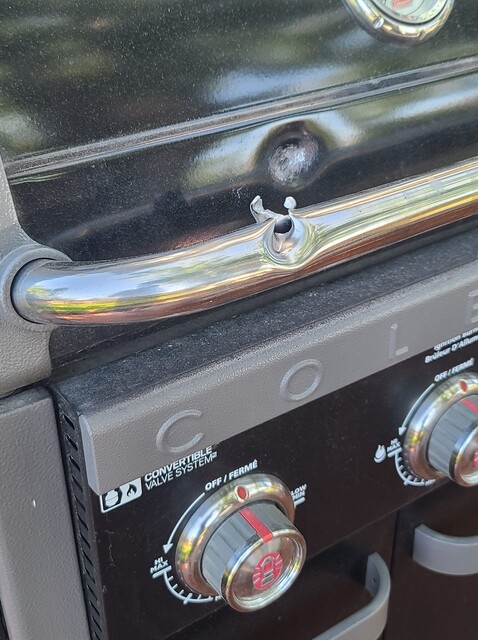