Photo: Wayne Emde Photography
Members of the Kalamalka Fly Fishers released the rubber ducks into the pond at Polson Park.

The water might have been running high but it didn’t stop the Vernon Lions Club from holding its annual Ducks for Dogs fundraisers.

Four thousand rubber duckies were dumped into the pond at Polson Park during the event which raises money for the B.C. and Alberta Guide Dogs. The funds will support the training of a service dog for an autistic child.

People 'adopted' a bright yellow rubber duck for $5 with the proceeds going to train service dogs. SilverStar Mountain Resort matched every ticket sold with a $1 donation.

It takes $35,000 to raise and train dogs for specific needs.

The event shifted to the pond because the waters of Vernon Creek were running fast and had risen to the top of its banks. A crew of Kalamalka Fly Fishers used garbage cans to empty the bright yellow toys into the pond and speed them along.

RCMP Superintendent Shawna Bayer and firefighter Allyson Reisch were there to scoop up the first three ducks to cross the finish line. 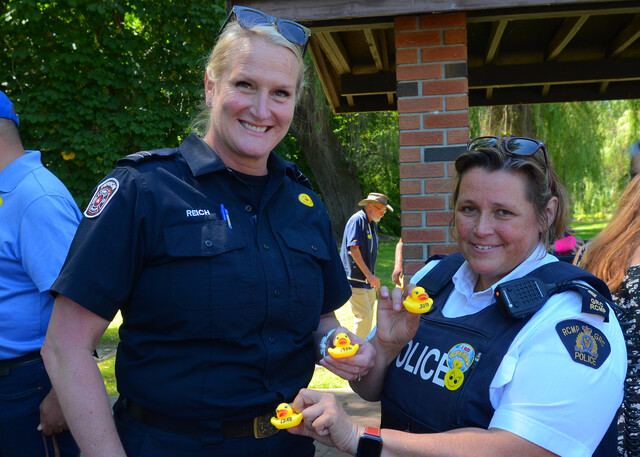