Kelowna was one of many cities across Canada and the U.S. that saw protests this weekend after the U.S. Supreme Court overturned Roe v. Wade.

The 6-3 ruling, a draft of which was leaked last month, upheld a Republican-backed Mississippi law that bans abortion after 15 weeks of pregnancy.

Some states have already halted abortions in the wake of the decision, while others vowed to protect reproductive rights.

Here in Canada, pro-choice advocates rallied to show their determination to prevent a rollback of access in this country.

Although some rights can’t be threatened in the same way in Canada because abortion is a legal medical procedure, some are worried the
U.S. ruling will fuel the rise of pro-life groups and feed disinformation.

They chanted "my body, my choice!” and "keep your laws off my body." They carried signs with messages including "The Handmaid's Tale is not an instructional manual" "reproduction rights = human rights" and "abortion rights are human rights".

A smaller group of pro-life counter-protesters gathered at Kelowna City Hall with their own signs. 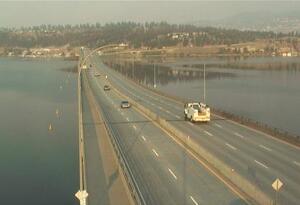