The Burnaby RCMP is asking for the public’s assistance in locating a high-risk missing person.

Rui Jin Su, who is 85 years old, was last seen walking northbound on Gilmore Avenue near Hastings Street, at around 12 p.m. (noon) on Friday,

Police said that Jin Su does not speak English, only Cantonese.

"It is unknown what she was wearing; however, she wears a gold bracelet on her right wrist with her son’s phone number on it. She also wears a jade bracelet with another phone number on it, on the same wrist," the press release said.

Rui is described as an Asian female, standing 5’3” with a medium build and white/grey ear-length hair.

"There is a chance that Rui took a bus to Chinatown in Vancouver."

Police are asking anyone who may have seen Jin Su or have information on her whereabouts to call the Burnaby RCMP at 604-646-9999. Jin Su may seem confused, so if you find her, please call the police and stay with her until the police arrive.

UPDATE: Police said on Saturday, June 25 that Rui Jin Su had been located and is safe. 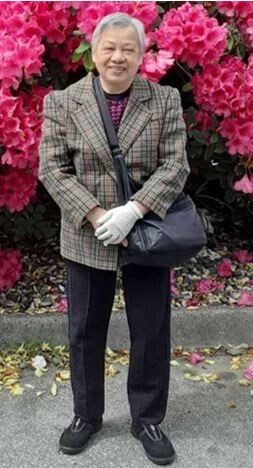