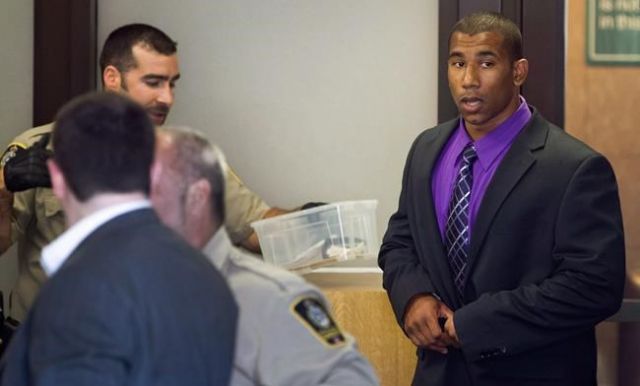 A British Columbia judge has sentenced a former Canadian Football League wide receiver convicted of killing his ex-girlfriend to life in prison, with no chance of parole for 14 years.

Joshua Boden was found guilty last fall of second-degree murder in the 2009 death of 33-year-old Kimberly Hallgarth in the Burnaby home she shared with her three-year-old daughter.

B.C. Supreme Court Justice Arne Silverman says his decision to set parole eligibility at 14 years took into account the fact Boden recently obtained a high school graduation certificate and has been seeing a counsellor while in pretrial custody.

Silverman told the court the school records in particular compelled him to provide some encouragement to Boden.

The former B.C. Lions player looked over at members of Hallgarth's family as he was led out of the courtroom after the sentencing.

"Have a good day," Boden said.

The Crown had argued parole eligibility should be set at 14 years, while Boden's lawyer asked for 12 years.

Crown prosecutor Brendan McCabe told a sentencing hearing last week that Boden, who is now 35, viciously beat Hallgarth, choked her to death and then staged the scene to make it look like an accident.

McCabe called the murder "blunt, brutal and horrific," saying photos of Hallgarth's injuries were the most shocking he'd seen in his career.

Boden played for the B.C. Lions in 2007 before being released from the team in 2008 and signing with the Hamilton Tiger-Cats, although he never played a regular-season game with that team before he was cut.

McCabe told the court Hallgarth sent photos of her injuries from a previous assault by Boden to then Lions coach Wally Buono, and Boden blamed her for ending his football career.

He has maintained his innocence in her death.