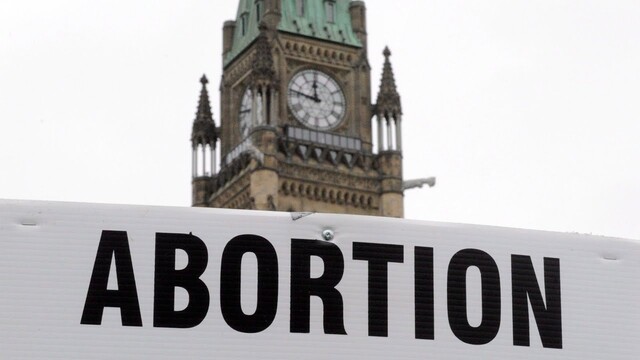 The ruling is expected to result in abortion bans in about half of the states.

President Joe Biden, who called the decision "wrong, extreme and out of touch," says he will do everything in his power to defend a woman's right to have an abortion in states where it will be banned.

Here in British Columbia, a grassroots organization wants the province to be a beacon of hope for reproductive justice in North America.

“The news coming out of United States is horrifying,” Teale Phelps Bondaroff, chair and co-founder of AccessBC, told Glacier Media in May following the leaked Supreme Court draft opinion.

“When we see a draft opinion, like the one that we saw in United States coming forward that fundamentally undermines a person's right to choose what happens to their body, we have feelings of outrage and frustration and horror and anger.”

When the news broke about the draft opinion, Canadian politicians, including Prime Minister Justin Trudeau, stated their support of a person’s rights to choose.

And while Phelps Bondaroff thought their response was “admirable and necessary,” he said more work needs to be done.

“We need politicians to bring that same energy when it comes to tackling other barriers to reproductive care. We have politicians saying you have a right to an abortion, which you absolutely do. And that's fundamental, but we don't have them throwing that same energy behind efforts to prevent unplanned pregnancy to remove other barriers to people accessing reproductive health services.”

This is one reason why AccessBC has been advocating for free prescription contraception in B.C. since 2017: conducting research, meeting with MLAs and consulting with government.

Abortion is and has been legal in Canada for a while.

In January 1988, the Supreme Court of Canada concluded that any law that restricted a woman’s right to life, liberty, and security of person was unconstitutional.

And this is a truth that needs to be reiterated, according to Dr. Ruth Habte, a resident physician in the department of obstetrics and gynecology at UBC, and a campaign organizer for AccessBC.

“There is no law that criminalizes or restricts abortion in Canada,” she said.

But she also understands the influence the U.S. can have on Canada.

“I think it emboldens people who are anti-abortion and can embolden people to maybe protest more or intimidate people away from doing what's best for their body. I think it also can lead to us having issues with ongoing access,” Habte said.

Abortion rights affect all individuals with a uterus, not only cis women, she said.

“People who are rich, people who have power in society who many times end up being rich, wealthy white cis females, will always be able to get an abortion,” explained Habte.

And Habte emphasizes that while abortion is legal and has been decriminalized, it’s not as accessible as people may think.

For example, Action Canada for Sexual Health and Rights notes that B.C. has 23 urban providers, but only one rural provider in the province. (Options for Sexual Health has a list of 50 providers across 35 communities, including several rural and northern locations, most of whom do not want their information posted online, according to a recent CBC article.)

And although the provincial gestational limit for a surgical procedure is 24 weeks and six days, this doesn't mean all providers can perform up to that mark.

"If anyone is wanting to have an abortion at 16 weeks or 18 weeks, it's a multi-day process. And they have to come to Vancouver to have that done," said Habte.

On their website, the BC Women's Hospital notes that patients who are seeking an abortion after 12 weeks can expect to have two or three days of appointments, and advises them to stay in Vancouver for a few days.

"So these people are travelling from their home communities, a lot of times have children, have jobs, have spouses, have commitments. [They] have to leave that behind, put that on pause for a few days, come down to Vancouver, have their procedure done, and then, you know, fly back or drive back to wherever their home community is," said Habte.

She added this is "a huge detriment in terms of what is available for abortion care in this province."

Part of the discrepancy is because the abortion procedure changes as the pregnancy is farther along, she said.

“So, after 14 weeks, the procedure becomes at least a two-day [event] and then after like 18 weeks, it becomes like a three-day kind of ordeal. And they take a very different skill set to be able to perform an abortion after 14 weeks, and one before,” said the doctor.

He said these costs disproportionally fall on people in marginalized situations, and those with low incomes.

In the 2020 B.C. NDP election campaign, the provincial party had pledged to make contraception free for all British Columbians, and Premier John Horgan had included free prescription contraception in his mandate letter to Health Minister Adrian Dix.

The government has yet to implement the policy and Phelps Bondaroff isn’t sure why.

“Free prescription contraception is a fantastic policy. It will make life more affordable, improve health outcomes for mothers, infants. It will increase equality and it will save the government millions of dollars,” he said.

In a statement to Glacier Media, B.C.'s Ministry of Health said they "are actively working on policy and other developmental work that will support implementing this commitment." But they did not specify a timeline.

It would save the B.C. government $95 million annually, according to a 2010 study from Options for Sexual Health.

“We’re kind of baffled as to why the government wouldn't jump on those kinds of savings, let alone the impact on equality, equity, affordability and health,” said Phelps Bondaroff.

With files from Canadian Press