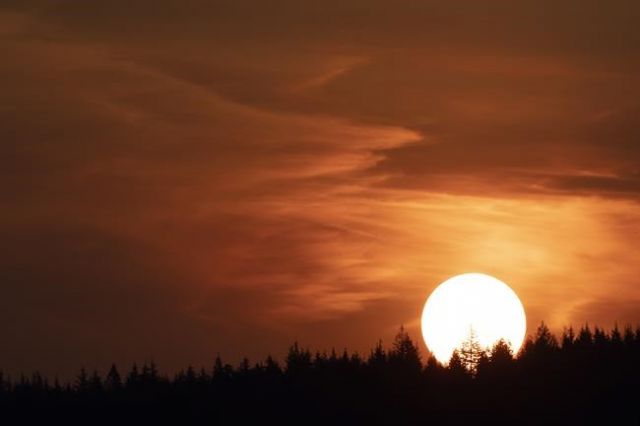 Photo: The Canadian Press
An enhanced coloured sun and sky due to the wildfires south of the border silhouettes trees on a mountain top in North Vancouver, B.C.

Rainy conditions that raised flood risks in much of British Columbia are being replaced by sunshine as a brief heat wave offers a respite until early next week.

The end of the downpours means the River Forecast Centre has lifted a flood warning for Blue River, west of Williams Lake, but the warning remains for the Quesnel River, which is heading toward levels this weekend that the centre says occur only once every 20 years.

A flood watch, which is an advisory of potential flooding, has also been downgraded to a high streamflow advisory for the Illecillewaet River and its tributaries around Revelstoke.

The centre is maintaining flood watches in the southern Interior for sections of the Thompson River, Shuswap, North Thompson and South Thompson rivers, as well as waterways in northeastern B.C.

As temperatures in the low to mid-30 C arrive, the centre says it's uncertain how the conditions could affect snowmelt and raise river levels, but it warns unsettled weather and thunderstorms are forecast next week, bringing additional flood risks.

Localized flooding has already been reported along some areas of Shuswap Lake, but officials predict levels should peak this weekend, avoiding severe flooding, while the City of Abbotsford says the Lower Fraser River will crest within six to nine days.

A post on the city's website says levels will stay high for several days once the peak is reached and "residents living in areas along the Matsqui Dyke and Glen Valley Areas may experience pooling of water or seepage."

An evacuation alert issued two weeks ago by the District of Kent, just east of Abbotsford, is still in effect for properties at the mouth of the Harrison River where it joins the Fraser River.

But drier conditions have allowed the District of Sicamous to lift the latest evacuation alert for 27 properties in a mobile home park at the base of a slope considered extremely likely to slide sometime in the next two years.