Last summer's Glenrosa arsonist is now out of prison

A man caught on camera last summer trying to set fire to a forest in a residential area of Glenrosa has been released from prison and into the custody of a recovery house in the Fraser Valley.

Stephen Leader, 37, pled guilty last week to one count of intending to cause an explosion resulting in harm in relation to a July 10, 2021 incident that saw him observed by residents lighting a fire near the top of Webber Road.

In exchange for his guilty plea, the Crown stayed four other charges.

Leader received a 223-day conditional sentence, followed by three years of probation. He had been behind bars since August 2021.

For the first 150 days of his conditional sentence, Leader will be under 24-hour house arrest at Joshua House Recovery Ministries in Abbotsford. After that, he will be on a curfew between 9 p.m. and 6 a.m.

He will be required to participate in and complete treatment, not possess incendiary devices, not possess or consume alcohol, not enter a bar or liquor store and not be within one kilometre of Glenrosa Road in West Kelowna.

At the time of his crime in July 2021, in the midst of a catastrophic wildfire season, Leader was serving 18 months of probation for three unrelated convictions of possession of stolen property over $5,000 and theft under $5,000 in West Kelowna, along with breaking and entering in Kamloops. The three charges all occurred in 2020.

A large police presence this evening in Peachland

There is a large police presence this evening in Peachland.

Witnesses in the area around Garraway Place indicate more than a dozen RCMP vehicles including the Emergency Response Team (ERT), have descended upon the neighbourhood over the past 90 minutes.

Several RCMP officers with guns drawn can also be seen in the area.

One resident of the area says the police helicopter has also been seen circling the area.

Pictures sent into Castanet show the front door of a home at 6033 Garraway Place has been busted open.

Officers and police dogs apparently entered the home once the door had been breached, however police have not been seen escorting anybody out of the home.

More information if, and when it becomes available. 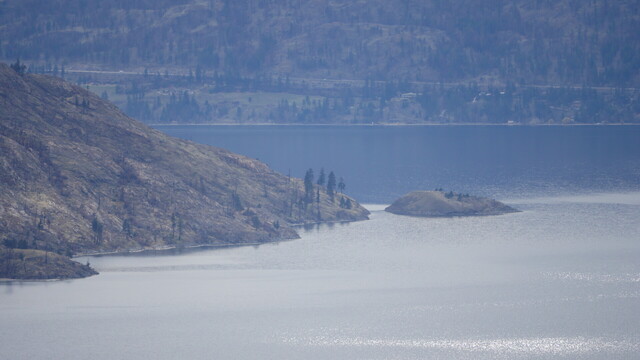 The body of a Calgary man who did not resurface after jumping into Okanagan Lake near Peachland has been recovered.

Samson Adedeji, 34, jumped from a boat near Squally Point, south of Rattlesnake Island, at about 3:45 p.m. on June 18.

RCMP said Monday they located his body in 64 metres of water about a half a kilometre from where he entered the lake. Sonar and a remotely operated underwater vehicle from the RCMP underwater recovery team were used in the recovery.

‘This was a tragic and sad event to start our summer season here in the sunny Okanagan,” said Const. Mike Della-Paolera Kelowna Media Relations Officer. “Our condolences to the man’s family and friends during this time.”

Adedeji had been vacationing in the Okanagan with five friends when he drowned.

West Kelowna residents have a new way to get around starting Monday.

“We’re very excited to be able to provide the people of West Kelowna with access to safe and reliable transportation 24/7. Being born and raised in the Kelowna area, I can relate to the struggles of not being able to find a ride home at certain times. Uride is now here with a team of dedicated drivers ready to prevent impaired driving and change the way people move around in West Kelowna”, said Ravi Dhami, western Canada operations manager for Uride.

Uride also has plans to launch service in Nanaimo, Prince George and Victoria, “with the goal of bringing safe and reliable transportation to underserved cities across Canada,” Dhami says.

As part of the West Kelowna launch, Uride users will receive a discount of up to 50% off all rides to a max of $10 each ride when using the promotion code WESTKELOWNA50 from June 27 to June 30. Uride is available for download on the App Store and Google Play Store.

Uride is also aggressively recruiting drivers to join the platform and they are offering part-time drivers a $1,000 sign-on bonus as well as weekly guarantees that could pay upwards of $30/hour.


City of West Kelowna looking for driver who crashed into bleachers

The City of West Kelowna is hoping a driver who crashed into a set of bleachers comes forward so the municipality can be reimbursed through insurance.

The city is seeking the public's assistance in identifying a light-coloured SUV, possibly an older model Nissan Pathfinder or Frontier with a canopy. The vehicle crashed into the bleachers Darroch Park on East Boundary Road on April 10, and left without reporting the incident.

The driver appeared to exit the scene unscathed, but the bleachers weren't so lucky and sustained $35,000 in damages.

The city says they are not seeking charges for the driver involved in the accident, but that they just need the driver's information to recover the costs of repair through insurance.

If you have any information on what happened, you can reach out to the City of West Kelowna.

City crews determined the issue was due to an equipment failure at a pressure reducing valve near McIver Road and completed repairs that evening.

“We are actively working with individual homeowners today, as they are calling in, to help them with their questions.”

Some residents of Glenrosa are mopping up and looking for compensation after their basements flooded.

Don Goy lives on McIver Road. He was surprised his hot water tank failed because it was just installed a couple years ago, when he and his wife moved into the home.

“I’ll be honest, I’ve been in a lot of homes and have seen a lot of hot water tanks go. Typically they start leaking from the bottom and, you know, it’s time to go, right.

He’s heard that more than 20 homes have been affected, and it wasn’t just hot water tanks. Some had the hoses burst on their fridge icemakers and overflowing hoses in their laundry rooms.

A plumber was at his house this morning to fix his hot water tank.

Another man who lives on McIver Road at McTaggart Road said he spent $800 out of pocket to get his relief valve repaired.

Goy has emailed the mayor and council asking for an explanation of what happened, and for compensation to cover the cost of the plumber, insurance deductible and the increase in residential insurance premiums. He says he'll be lucky if the bill comes in under $1,000.

He got a response from executive assistant Collette Beggs, saying she would forward his email to the Utilities Department.

Marni Murray, who lives on McBain Road, was one of the first to notice something was wrong.

She got home early in the afternoon and saw water bubbling up in her yard. When she went inside, she heard a strange noise coming from her utility room, and when she opened the door she saw water gushing out.

She called the city. A utilities worker came and told her they were investigating if a valve let go.

Murray guessed it could be related to the new $3.2 million reservoir being built up Glenrosa Road near Turnbull Road.

Castanet has reached out to the City of West Kelowna for details. City utility crews were in the neighbourhood dealing with the situation Wednesday evening. 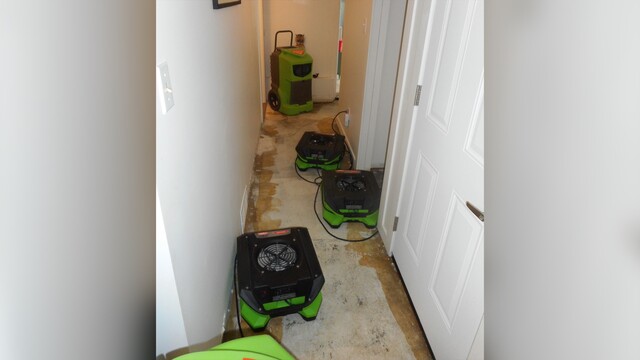 The City of West Kelowna has upgraded the water quality advisory for the Sunnyside/Pritchard water system to a full boil water notice.

The change has been made due to an increase in turbidity levels affecting further deterioration of the water quality.

Under a boil water notice, everyone in the service area must use water brought to a rolling boil for one minute or more, or seek an alternative safe source, for brushing teeth, drinking, making baby formula and ice, preparing food and beverages and washing fruits and vegetables.

An interactive map of West Kelowna water systems is here. A water quality advisory is also in place for the West Kelowna Estates system

The West Kelowna Indigenous Policing Section hosted 16 youth last month for a mini Depot-style experience called “Cop Camp," with a focus on shedding a positive light on the RCMP for young Indigenous kids.

The children were given matching tracksuits, put inside a dorm-style environment and were instructed on a wide variety of aspects within the RCMP.

The four-day event introduced the youth to the importance of physical fitness, drills, and demonstrations shown from various sections of the RCMP such as, police dog Services, forensic identification, emergency response team, traffic services and recruiting.

Const. Rolly Williams — who organized the event — says the goal was to pique the kids’ curiosity and to show them a snapshot into the Depot experience, as well as to explore career opportunities as a police officer.

“These young people are our future. My job here is to get a few kids to come out of the camp and get them interested in and excited about becoming a member of the RCMP. With a career in the RCMP, they can go out and make a difference in the world,” explained Williams.

The experience came two years after it was postponed by the COVID pandemic. 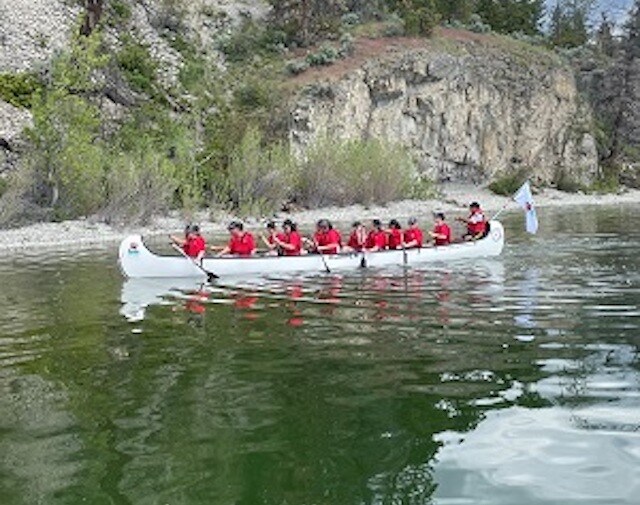 A West Kelowna woman says she was charged by an aggressive coyote near Rose Valley Elementary School last week.

Kirst Racich says she was walking her dog on June 18, just before noon, when a coyote lunged at her and her dog. She called the experience "intense."

Racich says she has lived in the Rose Valley area of West Kelowna her whole life and has never seen a coyote act so aggressively.

“I ended up hiding underneath a fence and being stalked for about 15-20 minutes by this thing, and it actually charged at us at one point."

Racich says she called Rose Valley Elementary to let them know, but they had already been alerted that there was an aggressive coyote in the area. At that point, Racich began backing away from the area and eventually began making her way home.

“I've lived in this area for 33 years pretty much and I've never seen a coyote be so aggressive and out during the day. I've seen bears out in the day and usually they just go on with their lives and don't really care but this coyote was not afraid. I've never been so scared in my life,” Racich says.

Coyotes can be aggressive when they are protecting their young and people with small pets are advised to keep them on a leash and keep their pets inside for their protection.

According to the provincial website, If a wolf or coyote approaches you: 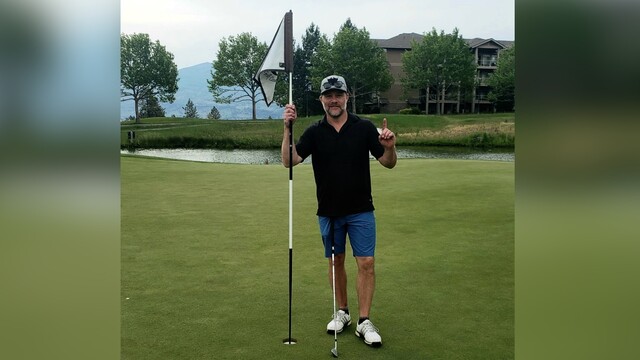 A men's night at Two Eagles golf course in West Kelowna was a lucky one for one player.

Brad Wightman nailed a hole-in-one on the 161-yard, 9th hole.

The ace scored him $25,000 in a contest sponsored by Cherry Hill Coffee.

The golf course is hosting four major men's nights events this season, with the next one taking place July 13.