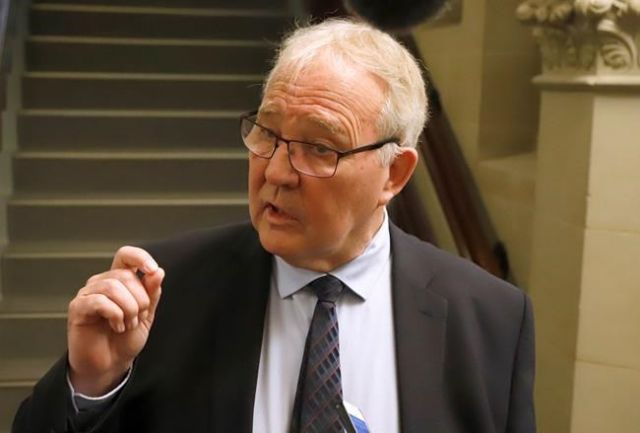 Photo: The Canadian Press
President of the Queen's Privy Council for Canada and Minister of Emergency Preparedness Bill Blair speaks with reporters as he arrives for a caucus meeting on Parliament Hill in Ottawa on Wednesday, June 22, 2022. THE CANADIAN PRESS/ Patrick Doyle

Blair was the minister of public safety at the time of the shooting spree that terrorized communities and killed 22 people over 13 hours on April 18 and 19, 2020.

A report published Tuesday by the inquiry investigating the tragedy includes notes from an RCMP superintendent alleging Lucki said she had promised Blair and the Prime Minister's Office that information on the guns used by the shooter would be released as it affected pending gun control legislation.

The same report quotes an RCMP communications director as saying Blair and Prime Minister Justin Trudeau were "weighing in on what we could and couldn't say" during media briefings.

Blair categorically denied that Lucki had ever made such a promise or that he had asked for the information. Nor, he said, did he tell anybody what the RCMP should communicate about their own investigation.

"I'm telling you, and I would tell the superintendent, if I spoke to him, that I made no effort to pressure the RCMP to interfere in any way with their investigation," he said. "I gave no direction as to what information they should communicate. Those are operational decisions of the RCMP, and I respect that and I have respected that."

"I think it’s important to say that on the easiest of days, it’s a very challenging and demanding job to be the RCMP Commissioner and certainly the worst mass shooting in the history of the country was probably one of the most difficult days, not only for law enforcement but for all Canadians," Mendicino said.

Federal Conservatives dismissed the explanations provided by Blair and said Lucki herself must also answer the allegations.

In a statement late Tuesday, Lucki said she would never take actions that could jeopardize an investigation. Briefings with the public safety minister are standard procedure and do not interfere with the independence of the RCMP, she said.

Lucki said she met with Nova Scotia RCMP in the days after the shootings to discuss the flow of information to national headquarters and the public release of information.

“It was a tense discussion, and I regret the way I approached the meeting and the impact it had on those in attendance,” she said.

Interim Conservative leader Candice Bergen called it "disgusting" that Trudeau and his government would leverage the massacre to advance their political agenda on gun control.

She also said a deeper investigation into the matter is warranted.

Mendicino said the inquiry is doing just that.

"I think we absolutely should continue to be totally forthright with Canadians, which is why the mass casualty commission has within their remit an independent way to look into the circumstances around all of this," he said.

Conservative House leader John Brassard said he's requesting MPs have an emergency debate in the House of Commons on the matter and then have a parliamentary committee dive deeper into the issue.

Nova Scotia Conservative Rick Perkins said he's already been hearing from upset constituents and expressed surprise at Blair, a former police officer, for casting doubt on the note-taking done by a RCMP member.

"Notes that have to be defensible in court — he implied that they were wrong," said Perkins.

New Democrat Leader Jagmeet Singh called for a full investigation into the allegations, saying the RCMP are supposed to act independently of the government.

"The RCMP must always serve the public interest, not the government’s political interest," he said in a statement.