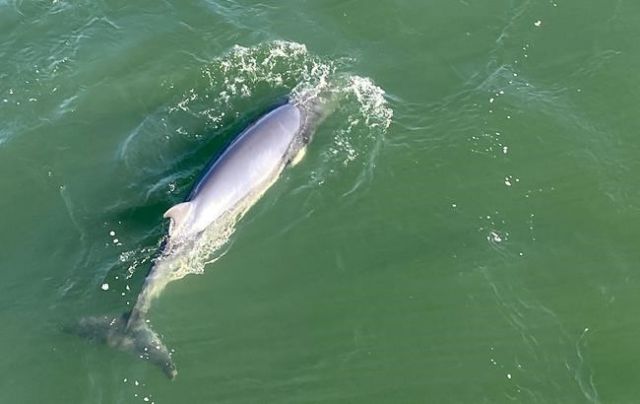 Photo: The Canadian Press
A whale is seen in the waters of the St. Lawrence River, near Montreal.

A dead whale found in the St. Lawrence River northeast of Montreal is likely the second of two minke whales spotted in the area earlier this month.

A Quebec marine mammal research group says the whale was recovered Friday from the waters near Contrecoeur, Que., about 50 kilometres downstream from Montreal.

A post to the Quebec Marine Mammal Emergency Response Network's website says the male whale, about 3.8 metres long and believed to be one to two years old, was transported to St-Hyacinthe for a necropsy.

The group says the state of the animal suggests it had died between a few days and a week earlier and its skin was covered with a fungi similar to that found on a humpback whale who died after a stay in Montreal in 2020, indicative of a prolonged stay in freshwater.

Minke whales are common in Quebec but don't generally venture west of the saltwater St. Lawrence estuary around Tadoussac, Que.

A final necropsy report is not expected for a few months, but the group says there was no obvious cause of death or signs of trauma observed, although an absence of food in the stomach suggests it had not fed recently.

It says there is no sign of the other minke whale, who was first spotted around May 8 in the Montreal area before both vanished around mid-May.