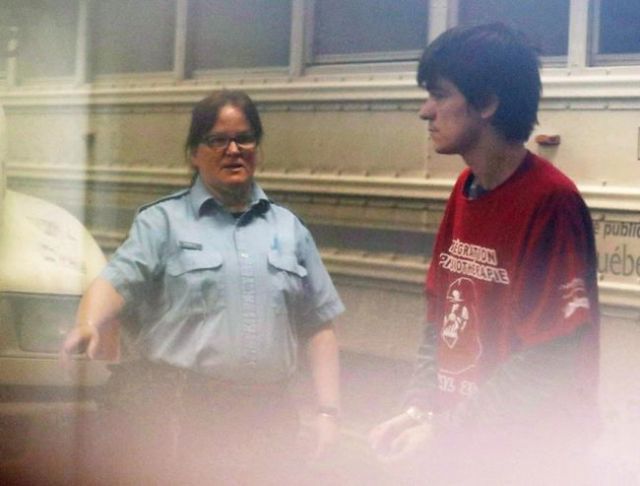 Photo: The Canadian Press
Alexandre Bissonnette arrives at the courthouse in Quebec City on Tuesday, Feb. 21, 2017. A Supreme Court ruling today that confirmed mosque shooter Alexandre Bissonnette would have to serve 25 years before being eligible for parole was met with disappointment from the Quebec City mosque where the attack took place. THE CANADIAN PRESS/Mathieu Belanger - POOL

Families of the victims of the Quebec City mosque shooter say they fear Friday's Supreme Court ruling means the 17 children who lost a father could one day meet the killer in the streets of Quebec's capital.

Canada's high court ruled that the killer who went on a deadly shooting spree at a Quebec City mosque in 2017 can apply for parole after 25 years behind bars. The court declared unconstitutional a 2011 Criminal Code provision that allowed a judge, in the event of multiple murders, to impose a life sentence and parole ineligibility periods of 25 years to be served consecutively for each murder.

Mohamed Labidi, president of the Islamic Cultural Centre of Quebec, where the killer shot dead six men on Jan. 29, 2017, said families of the victims expressed real concern the killer would be a free man within a relatively short period of time.

"Maybe parole (officials) will delay this release a bit (and) will take that into account, but that's our real fear," Labidi told a news conference.

The Islamic Cultural Centre of Quebec said in a statement Friday the high court decision did not give due consideration to "the atrocity and scourge of multiple murders" or to the hateful, Islamophobic, racist nature of the crime.

Members of the mosque said they were disappointed with the decision from the court, but they added it allows them to close the legal chapter and focus on the future.

“Philosophically, yes, we would like to turn the page and I, personally as an individual, want to turn the page," mosque co-founder Boufeldja Benabdallah told reporters. "I have been hurt enough and I have cried enough."

Benabdallah said the Supreme Court decision "breaks the balance" between a criminal's chance at reintegrating society and his or her victims' sense of justice.

"We take into account the rehabilitation of an individual … and to not give a punishment that is inadmissible, unusual or cruel," Benabdallah said. "But at the same time, the families who have been affected must also feel that they have won their case, that the killer is being punished for his crimes."

Alexandre Bissonnette pleaded guilty to six counts of first-degree murder and was sentenced to life in prison. Five others were seriously injured in the January 2017 attack, including one man who was left paraplegic and confined to a wheelchair. The six men who were shot dead left behind 17 children.

A trial judge found the 2011 parole ineligibility provision unconstitutional but did not declare it invalid, ultimately ruling Bissonnette must wait 40 years before applying for parole.

Quebec's Court of Appeal said the trial judge erred in making the ineligibility period 40 years and that the court must revert to the law as it stood before 2011, resulting in a total waiting period for Bissonnette of 25 years. The Crown appealed that decision.

The Supreme Court said the 2011 law violates the Charter of Rights and Freedoms and that in order to ensure respect for the inherent dignity of every individual, the Charter requires Parliament to leave a door open for rehabilitation, even in cases where this objective is of secondary importance.

One of Bissonnette's lawyers, Charles-Olivier Gosselin, said his client was relieved by the ruling.

"It's a second chance, a second life that Mr. Bissonnette can hope for to demonstrate to society that he can be an asset, that he can work on himself, move on and look forward," Gosselin said at the courthouse in Quebec City.

Daniel Bélanger, the chief prosecutor for Quebec City, said he would not comment on the decision out of deference to the high court, but he spoke of the victims and their families.

"This day marks for them the end of a long judicial process, but we are aware that it is not the end of their grieving and healing process," Bélanger said, reading from a prepared statement.

He said the Crown and police in Quebec City were diligent in their work all the way to the Supreme Court, demonstrating the capacity for the judicial system to conclude complex cases in the public’s interest.

Bélanger reminded reporters in Quebec City that Bissonnette received a life sentence and it will be up to the parole board to decide whether he is released, which now won't come before 2042. The killer, he said, would be subject to strict conditions and surveillance by a parole officer for the rest of his life in the event he is freed from prison.

"Although this case has become a constitutional debate regarding the provisions of the Criminal Code, we need to remember, in closure, the six people murdered and the other victims of this attack on Jan. 29, 2017," Bélanger said.

"Our thoughts are now with the victims and their families and the community affected by this crime that has marked the collective consciousness. We praise their courage, their resilience and their dignity in this moment."