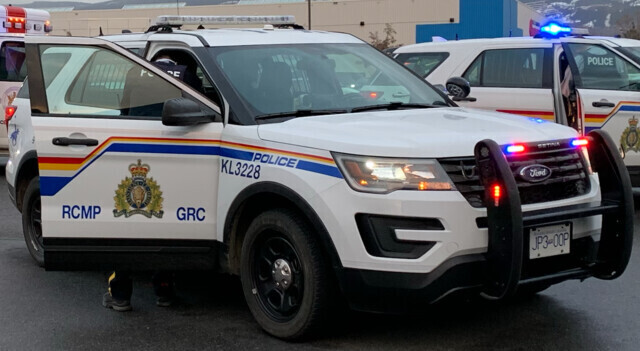 Kamloops RCMP had to take extra precautions after being alerted to a potential weapons call at a North Shore restaurant Thursday night.

Intial reports indicated that bear spray may have been deployed and one person may have been stabbed at a restaurant in the 600-block of Fortune Dr. at approximately 8 p.m. Thursday.

RCMP say a man was reportedly inside a restaurant and threatening a person with weapons and subsequent reports indicated a person had possibly been stabbed and that bear spray had been deployed, prompting a heavy police presence in the neighbourhood.

“Inside, police quickly located a man identified as the suspect, who was still in possession of a weapon,” said Constable Crystal Evelyn, Kamloops RCMP spokesperson. “The presence of a weapon increased the risk to the public and to the officers responding, and the man was quickly taken into custody to prevent escalation.”

RCMP determined that there was no stabbing and bear spray had not been used.

A woman and another man were also arrested in relation to the incident. The accused received a court date and conditions, the victim was wanted and held on a warrant, and a woman was released without being processed.

Weapons and drugs were seized as part of the ongoing investigation.