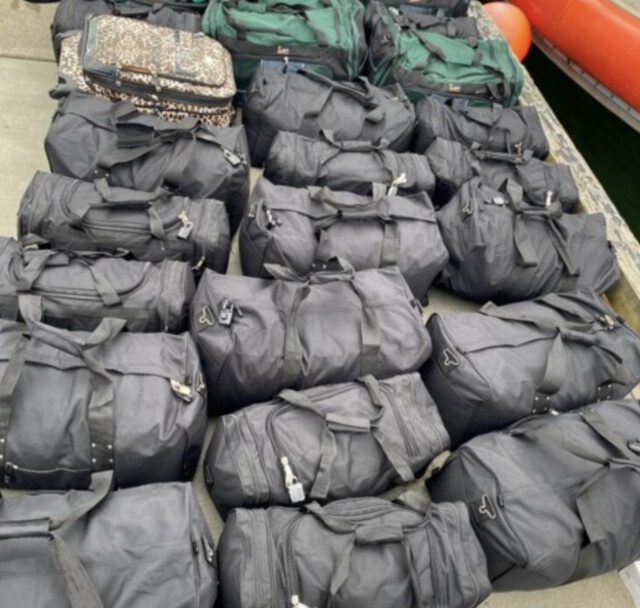 Photo: U.S. CUSTOMS AND BORDER PROTECTION
Officials with U.S. Customs and Border Protection seized 28 bags filled with methamphetamine from a Canadian boater on Wednesday, May 25, 2022.

U.S. authorities say they stopped a small boat carrying a large shipment of methamphetamine after they saw it riding low in the water near the Canadian border with Washington state.

U.S. Customs and Border Protection said officers stopped the 18-foot Bayliner speedboat in the San Juan Islands on Wednesday as it was headed toward Canada.

They reported finding 1,432 pounds of meth on board, packed in 28 duffel bags secured with luggage padlocks.

The boat’s occupant, identified as Ted Karl Faupel, a resident of Alberta, was arrested on a drug distribution count. He made an initial appearance in U.S. District Court in Seattle on Thursday; his attorney, federal public defender Vanessa Pai-Thompson, declined to comment.

According to a federal criminal complaint filed in U.S. District Court in Seattle, Faupel told investigators that he had been hiking near a marina in Sidney when someone approached him and offered him $1,000 to move a boat from Sidney to Anacortes, Washington, and back.

The man said he left from Vancouver Island on Tuesday, the complaint said. He said four men met him at a Washington State Parks boat dock, took the boat on a trailer and dropped him off at an inn. The next day, they brought him back to the dock and he left in the newly loaded boat to return to Canada.

He said he did not know what was in the duffel bags, the complaint said.