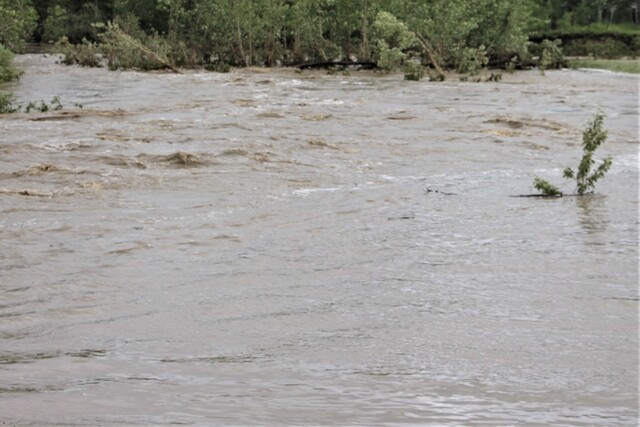 Photo: Dave Lueneberg
The River Forecast Centre has issued a Flood Watch for rivers and tributaries in the BC Peace. As much as 80 millimetres of rain is forecast to hit some parts of the region by Saturday night.

Environment Canada warns prolonged rains will drench parts of northern B.C. over the weekend, raising the potential for localized flooding.

A rainfall warning has been issued for the North and South Peace River regions as the weather office says rainfall of up to 50 millimetres is expected between Friday and late Saturday.

Forecasters say total rainfall could reach 60 to 80 mm near Hudson's Hope and Chetwynd before downpours ease to showers as the storm moves on.

The warning says heavy rainfall on top of pre-existing saturated soils can make the situation worse and raise the risk of localized flooding.

The River Forecast Centre has upgraded a high streamflow advisory to a flood watch for the Peace Region, advising that waterways could reach levels only experienced once a decade as rain combines with ongoing snowmelt.

The centre says conditions are expected to peak by Sunday and it is maintaining a high streamflow advisory for the Bulkley River and its tributaries in northwestern B.C., as rain and snowmelt push those waterways to two- to five-year flows before their expected peak early Sunday.