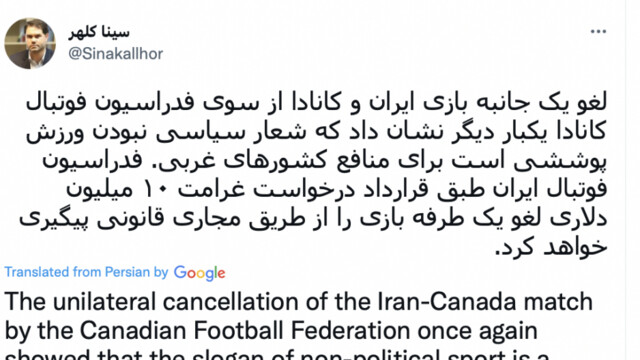 Photo: Contributed
Translated version of a tweet from Sina Kalhor, Iran's Deputy Minister of Culture and Public Sports in the Ministry of Sports and Youth threatens to sue the Canadian Soccer Association for $10 million

An Iranian government official has threatened to sue the Canadian Soccer Association for $10 million after it cancelled a June 5 World Cup tune-up match at BC Place Stadium.

The CSA announced the cancellation early May 26 without reasons, but it had faced a firestorm of complaints from human rights advocates and senior politicians after scheduling the match featuring two squads that have qualified for the Qatar 2022 World Cup.

A translated version of a tweet from Sina Kalhor, Iran’s Deputy Minister of Culture and Public Sports in the Ministry of Sports and Youth, said that the CSA’s unilateral cancellation “once again showed that the slogan of non-political sport is a cover for the interests of Western countries.

“According to the contract, the Iranian Football Federation will pursue a $10 million compensation claim for the unilateral cancellation of the game through legal channels,” Kalhor wrote.

Prime Minister Justin Trudeau, Premier John Horgan and Mayor Kennedy Stewart had all criticized the CSA’s choice of Iran, all sympathizing with families of the victims of the Islamic Revolutionary Guard Corps deadly missile attack on Ukraine Airlines flight 752 in Tehran more than two years ago. All 176 people aboard, including 55 Canadian citizens and 30 permanent residents, were killed.

On May 24, Trudeau said it was ultimately up to the Canada Border Services Agency whether the Iranian national team would be allowed into Canada.

“I’ve expressed my concern that I think this game was a bad idea. I can assure you that Sport Canada has not delivered any funding for this game,” Trudeau said during a photo op in Vancouver.

B.C.’s Ministry of Tourism, Arts, Culture and Sport said it did not provide any standalone funding to the planned June 5 match. It did not say whether public-owned BC Place Stadium would lose money on the cancellation.

“The attack on flight PS752 was a tragic event, and our hearts continue to go out to the victims and their families,” said the ministry’s statement. “The government of B.C. condemns the use of violence in any form and is committed to upholding human rights and equality through the B.C. Human Rights Code.”

The CSA had previously justified its matchup with Iran because “the power of sport and its ability to bring people from different backgrounds and political beliefs together for a common purpose.”

But it also needs hundreds of millions of dollars in funding to be approved from the same politicians who criticized the choice of opponent.

Vancouver, Edmonton and Toronto are in the running to host a combined total 10 matches in the 2026 World Cup, which is primarily hosted by the United States Soccer Federation. The 16 host cities will be announced June 16.

In April, the B.C. government revealed that it could cost $260 million to host up to five matches at BC Place in 2026. In 2018, Horgan had scoffed at FIFA for wanting a “blank cheque” from B.C. taxpayers, but he changed his tune last summer.

Staff at Toronto city hall, however, have been more transparent about the risks. In a March report to council, it indicated a decision on federal funding is still months away.

“Sport Canada has indicated that hosting the 2026 World Cup in Canada qualifies for this program, but has not yet declared how much funding they would provide beyond the parameters of the policy (up to 35 per cent of total eligible event expenditures by all parties up to a maximum federal contributions of 50 per cent of all public sector funding),” said the Toronto civic report.

The federal government indicated a decision on how much it is prepared to fund will come after it has completed a national safety and security concept as part of the federal essential services portion of the hosting agreement. “Full security costing is not likely to be available until late 2022.”

Toronto projects the cost of hosting five games could be as high as $290 million, with FIFA picking up only $12.7 million of the tab. City taxpayers would be on the hook for $74 million in direct cash and in-kind costs.

The report further said that FIFA’s new operating model means no rights fees are paid by cities, and they won’t assume the financial risk.

“FIFA will assume significant delivery costs and also retain the main sources of revenue, such as media rights and ticket sales. Host cities will be limited to covering local hosting costs, which include providing a stadium and infrastructure for support activities; training facilities; a location, staffing and infrastructure for a FanFest; and local safety and security coverage – all in compliance with FIFA’s requirements.”