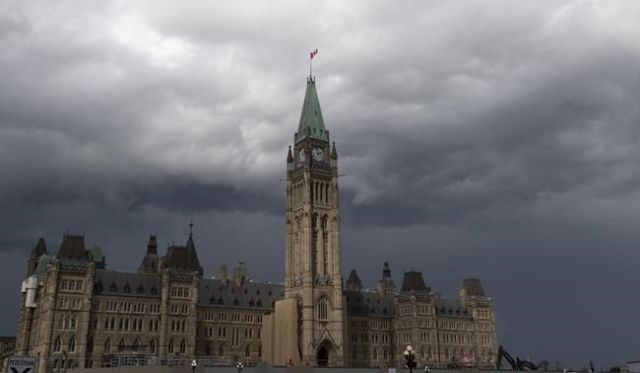 Photo: The Canadian Press
Storm clouds pass by the Peace tower and Parliament hill, in Ottawa, Tuesday, Aug. 18, 2020. A special joint parliamentary committee will now consider its report on current legislation assisted death and whether to expand who is eligible to opt for it. THE CANADIAN PRESS/Adrian Wyld

A special joint parliamentary committee will now consider its report on current legislation on assisted death and whether to expand who is eligible to opt for it.

The committee of MPs and senators is considering whether medically assisted dying should be expanded to people solely suffering from mental illness and mature minors.

It is also considering whether it should let people opt in to assisted dying in advance before they lose the mental capacity to do so.

The committee was also tasked with studying a host of associated issues, such as the state of palliative care in Canada and the protection of Canadians with disabilities.

It will begin drafting its report based on its findings.

The government already agreed in Bill C-7 passed last March to lift the current ban on assisted dying for those suffering solely from mental illness in 2023.

It set up a separate panel of experts to advise on the rules that should apply in those cases and the panel made 19 recommendations in a report tabled earlier this month.

The government's work on the legislation is under scrutiny as critics say the law has unforeseen effects, amid reports of people opting for a medically assisted death because of inadequate care or resources.

The Liberals faced criticism last year for proceeding with amendments to the law — in response to a Quebec court ruling, which struck down the requirement that a person's death be "reasonably foreseeable" — without having even launched the promised review.

Meanwhile, the Quebec government is removing a section of its end-of-life care bill that would have allowed quadriplegics and people with cerebral palsy to receive an assisted death.

Health Minister Christian Dubé told reporters that opposition parties expressed concern with the bill, which was tabled Wednesday, because the question of extending medical aid in dying to people with neuromuscular disorders was never debated in the province.