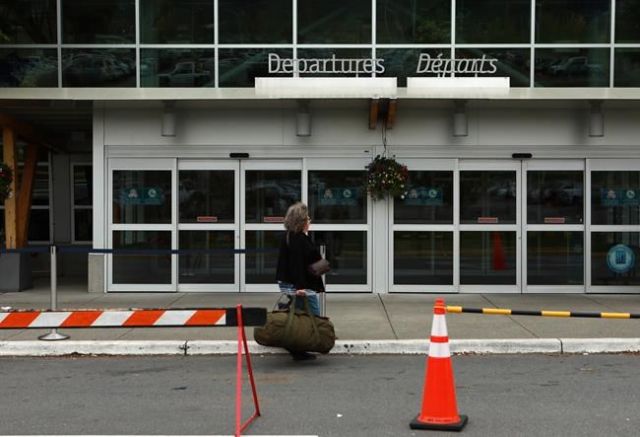 Photo: The Canadian Press
A person stands outside Victoria International Airport in Sidney, B.C., as the RCMP respond to a call that caused all commercial flights to be suspended on Tuesday, May 24, 2022. Police say the closure of the airport on Tuesday was triggered by a man heading out of Canada with inert grenades in his luggage. THE CANADIAN PRESS/Chad Hipolito

Police say the closure of the Victoria International Airport on Tuesday was triggered by a man travelling out of Canada with inert grenades in his luggage.

RCMP Cpl. Andres Sanchez describes the items as looking and feeling like "the real thing," but lacking the internal parts required to explode.

He says airport security staff called 911 and held the bag in the X-ray machine until police arrived and found that a second bag belonging to the same man was also inside the machine, but it had yet to be scanned.

The inert grenades in the first bag were "manual," Sanchez says, meaning someone would have had to trigger any potential blast, had they contained explosives.

Sanchez says the second bag couldn't be safely scanned and police were concerned about potentially dangerous contents, prompting officials to shut down the airport entirely for several hours.

He says the Mounties expect to recommend a mischief charge against the man who claimed responsibility for the bags.

The man in his 40s was arrested Tuesday and released with a court date and conditions, including that he not go to the airport, Sanchez says.

He has "some criminal history," Sanchez says, but it's not related to anything police are investigating in connection to the airport incident.

He's not a current serving member of the Canadian military and "it's still to be determined the level of, if any, of his service previously," Sanchez adds.

Asked about the mischief charge, he says "a reasonable person would know" that bringing such items to the airport would likely cause an issue.

"One of the ways that you can look at mischief is stopping the lawful enjoyment and lawful use of a business, which is the airport," he says.

He did not say where the man intended to travel outside Canada.

Sanchez says the second bag was found to contain military-related items, but they weren't explosive and didn't pose any potential risk.

He adds that police can't yet say if the inert grenades contained explosives in the past, but they never had the potential to explode at the airport.

The airport authority says Tuesday's shutdown caused about 20 flights to be cancelled, as well as some delays, affecting an estimated 1,800 passengers.