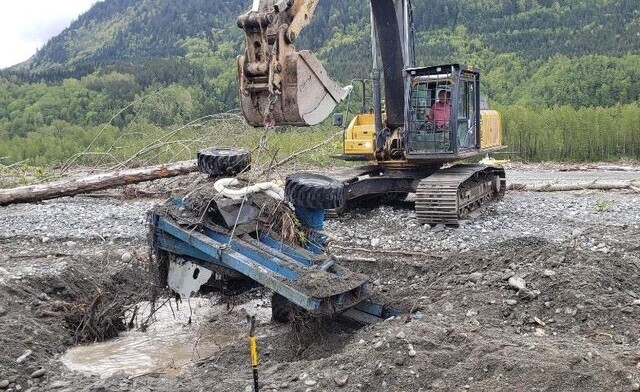 Environment Minister George Heyman, in an email charting the progress of debris removal, says a "significant amount of large and small-scale debris" has been removed from provincial waterways.

The work, according to Heyman, was a collaborative effort including local communities, specially trained teams and First Nations.

The province, he says, established a multi-phased response to identify, prioritize and remove debris within eight major river systems.

Reporting from members of the public, as well as the use of helicopter drones and GPS imaging, identified more than 300 sites along major waterways.

About 75 per cent of debris from the first phase of the project has been removed, including 72 vehicles, four bridges and 11 structures.

"The majority of debris sites identified have now been cleared through this first debris recovery phase. This collaborative effort will continue as we prepare for spring freshet and the possibility of more debris surfacing," said Heyman.

The program has provided employment for nearly 500 people in local communities and First Nations.

Many of these workers are engaged in full-time work to remove debris throughout affected regions and take part in training and certification courses, such as first aid, spill response and swift water rescue training as well as equipment and chainsaw operation.

Heyman says crews will continue to assess affected areas and are planning to identify and remove any remaining debris as part of Phase 2 of the debris removal program following the freshet season.