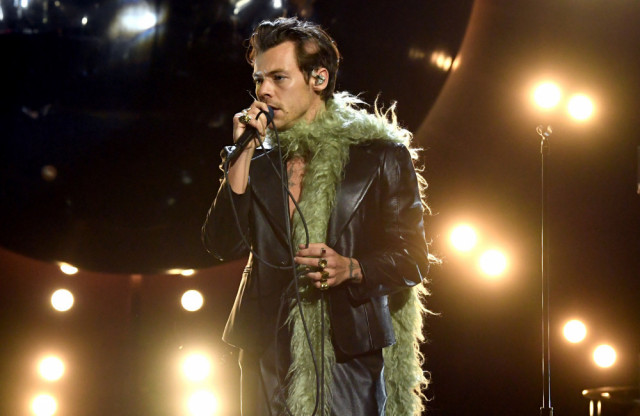 Harry Styles halted his sold-out London show to help a fan in distress.

The 28-year-old singer stopped his One Night Only gig at London's O2 Academy Brixton on Tuesday night midway through a performance of his 2017 single 'Sign Of The Times' to make sure the supporter was OK.

Harry - who draped a Ukrainian flag over his microphone stand - asked fans if they could "split, make a pathway down, please", and addressed the rest of the crowd, saying: "Everyone else good? You OK?

"We’re going to keep going if everyone feels good."

Just under 5,000 fans flocked to the South London venue to take in the barnstorming performance, as Harry treated his supporters to a number of songs from his latest album, 'Harry's House', as well as his 2020 hit 'Watermelon Sugar', among others.

Also during the show, Harry told a fan she is "better off" without her ex after the supporter claimed, via a sign, he had cheated on her.

After spotting the notice in the crowd, Harry said: "This sign says, I might paraphrase, 'My boyfriend slept with my best friend,' and then it says, 'Boyfriends suck.' "

Harry then asked the fan, Jess, what her boyfriend's name was, and she responded: "Luke."

"What I will say is, you’re better off without him."

What's more, Harry didn't forget his 1D roots as during the show he belted out a version of the band's debut single 'What Makes You Beautiful', before leading his crowd in a rendition of 'Happy Birthday To You' for a fan.

Prior to the spectacle, Harry's fans were banned from queuing until 12 hours before the show.

Over the weekend, the venue explained the rule was due to other concerts "on the preceding nights."

The team tweeted: "If you're lucky enough to have tickets to @Harry_Styles, we're as excited about this show as anyone but we have other gigs on the preceding nights so we must stress that you won't be able to queue for it until 8 a.m. on Tue 24 May.

"Thank you for understanding."