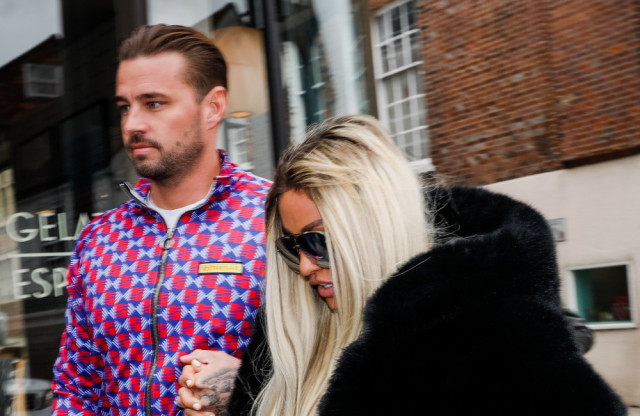 Katie Price has pleaded guilty to breaching a restraining order against her ex-husband Kieran Hayler's fiancée.

The 44-year-old star has been warned she could face time in jail after she pleaded guilty to the breach at Lewes Crown Court, south east England, on Wednesday (25.05.22).

Katie is banned from contacting Kieran's partner Michelle Penticost under the terms of a five-year restraining order, but in January she was arrested on suspicion of breaching her restraining order with an abusive text message to Kieran, branding his flight attendant girlfriend a "w***e, piece of s***" and a "gutter s***".

Speaking in court on Wednesday, judge Stephen Mooney told the mother-of-five: "Clearly you have accepted responsibility for this offence and that you indirectly tried to communicate Ms Penticost despite her restraining order against you.

"I must warn you Ms Price that you are at risk of going to prison."

The judge also warned the model - who has kids Jett, eight, and Bunny, seven, with Kieran - that the offence carries a maximum sentence of up to five years in prison.

OnlyFans content creator Katie - whose partner Carl Woods was at court to support her - has been bailed ahead of the sentencing hearing on June 24th.

Last month, Katie - who also has children Harvey, 19, with Dwight Yorke, and Junior, 16, and Princess, 14, with first husband Peter Andre - pleaded not guilty to breaching a restraining order when she appeared at Crawley Magistrates' Court, and she asked for a crown court trial.

Questioned where she wanted to be tried, Katie said: "The Crown Court please."

Joe Harrington, defending, said at the time: "The issues relate to her mental health and the triggers which led to sending that message."

In December, Katie was given a 16-week suspended jail term after admitting to drink-driving, following an incident in which she flipped her car over.

She was also due to appear at Crawley Magistrates' Court accused of speeding, but the case has been adjourned to July 5th.