Crushed by load of logs 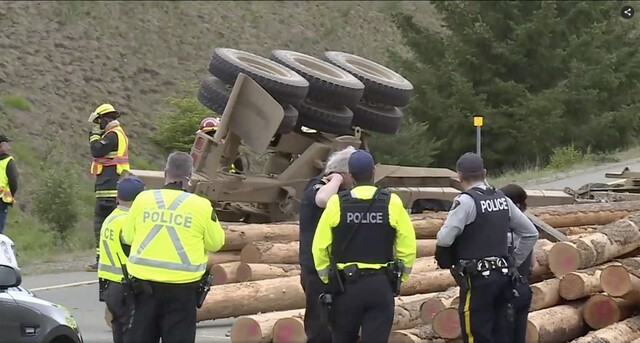 Photo: CHEK NEWS
A logging truck spilled its load on a car that was parked on the shoulder of the Highway 19 on-ramp at Comox Valley Parkway on Tuesday, May 24, 2022.

A Lake Cowichan man is dead and a woman is injured after a logging truck lost its load, crushing a pickup truck parked on the side of a Comox Valley Road.

Comox Valley RCMP continue to investigate after the logging truck lost its load around 2:35 p.m. on Tuesday on the northbound on-ramp to Highway 19 off the Comox Valley parkway.

The loaded truck appears to have tipped before losing its load of logs onto the parked pickup.

“It appears that the pickup truck had pulled over to the shoulder of the road and the man was standing outside when the logging truck came around the corner and lost its load, causing the logs to fall on them,” said Const. Monika Terragni of the Comox Valley RCMP.

Emergency responders worked to extricate the woman from the truck and took her to hospital.

The cause of the accident remains under investigation. The B.C. Coroners Service is also looking into the death of the 43-year-old man.

The B.C. Highway Patrol in Campbell River is asking anyone who saw the crash, observed the vehicles before the crash or has dashcam footage to contact them at 250-286-5646.