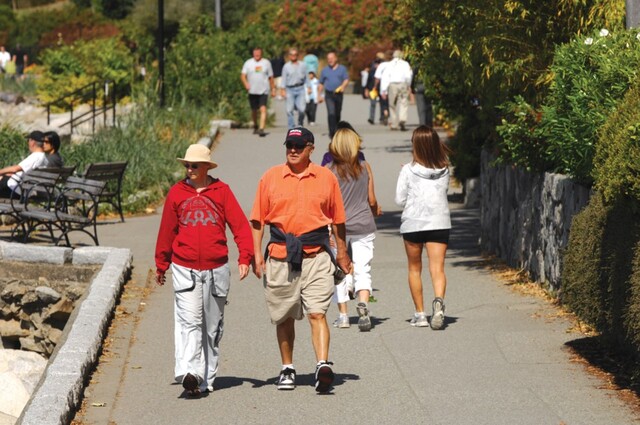 A 52-year-old woman has been arrested after an unprovoked attack on a 92-year-old man on the West Vancouver Seawalk.

The attack happened just after 3 p.m. Monday afternoon (May 23), when the senior was riding his mobility scooter on the Seawalk near John Lawson Park, said Sgt. Mark McLean of the West Vancouver Police Department. As the elderly man passed by the woman, she punched him in the face with her fist, said McLean.

McLean said the senior and the woman who punched him did not know each other and there had been no conversation leading up to the attack.

The senior was left bleeding from the head and was checked out by medical personnel. "All things considered he was doing pretty well," said McLean.

McLean said police don't know what motivated the attack, but added, "We certainly have some suspicion that mental health plays a role."

Saima Qamar, 52, of no fixed address has been charged with one count of assault and is being held in custody by consent pending a bail hearing.

According to West Vancouver police, Qamar was also wanted on an outstanding warrant for charges related to a similar alleged unprovoked assault in December 2019.

In that incident, Qamar was causing a disturbance in the West Vancouver Memorial Library, said McLean. When a staff member tried to intervene, Qamar allegedly threw a cup of hot coffee at the staffer, causing minor burns.

McLean said he hasn't heard of many random attacks on strangers on the North Shore although, “I know regionally there has been an uptick that’s well documented.”

More often in cases of assault, the attacker and the victim know each other, he said.

“These types of incidents are as much a concern for police as they are to the public,” said McLean.

The attack comes at a time when public concerns have been recently expressed about unprovoked attacks on strangers in public places throughout the Lower Mainland.