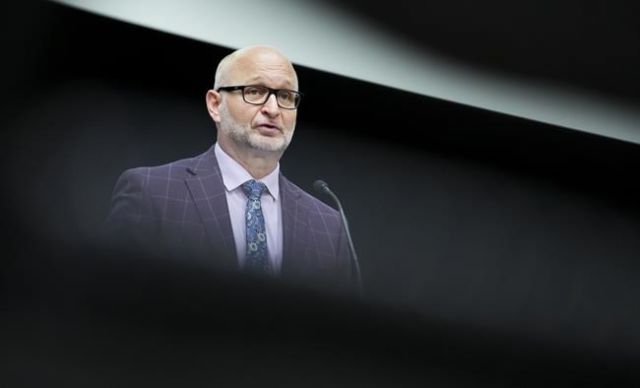 Photo: The Canadian Press
Justice Minister David Lametti makes an announcement in Ottawa on Monday, May 16, 2022. Lametti says his government is not ruling out a court challenge to a recently adopted Quebec language law, but he says it will depend on how the law is implemented. THE CANADIAN PRESS/Sean Kilpatrick

Indigenous communities in Quebec say the language law passed Tuesday will harm the education prospects of their youth and undermine reconciliation in the province.

In Kahnawake, south of Montreal, members of the community are meeting daily to discuss ways of contesting the law, said Mike Delisle, a member of the Mohawk Council of Chiefs. Delisle said the Coalition Avenir Québec government did not adequately consult with Indigenous communities about the reform.

"The word 'reconciliation' is out of the window at this point," he said in an interview Wednesday. "Those are just words on paper, it doesn't mean anything to us, because their words are not true."

Delisle said that for historic reasons, many people in his community learn English rather than French. He said young people are worried about a requirement that students at English-language junior colleges take three additional French-language classes. On Saturday, a group of Kahnawake students led a protest march, stopping traffic on a major bridge into Montreal.

The impact in colleges is also a concern for Sarah Aloupa, the president of Kativik Ilisarniliriniq, the school board in Quebec's northern Nunavik region.

"Many of our students go to school in English. There is no French immersion in our schools, so you study either fully in English or in French after Grade 3," she said in an interview Tuesday.

She said the additional French classes will be another burden for students who already have to travel long distances to pursue post-secondary education outside the region. She said the law may push young people to study outside the province.

The law shows a lack of understanding of the unique language and culture in the North, she said.

"As Inuit people, we're not even 20,000 people, and we are considered to be endangering the French language," she said. "I think we will have no choice but to go to court to be heard."

Delisle said people in Kahnawake are also worried about the effects of the bill on community-run health and social services agencies, as well as the impact it will have on the community's police service and access to justice.

The language law reform, known as Bill 96, forbids provincial government agencies, municipalities and municipal bodies from making systematic use of languages other than French.

It also requires court decisions to be immediately translated into French, forbids companies from pleading in court in other languages and gives the province's justice and language ministers the ability to decide which judicial postings require English, a decision that was previously made by the chief justice.

The Assembly of First Nations Quebec-Labrador described the bill as a "major step backwards" that puts reconciliation "on hold."

"To deny the rights of others to assert one's own, to brutally assert one's supremacy over other nations that share the same territory is unworthy of a government that respects itself," Grand Chief Ghislain Picard said in a news release after the bill passed.

Federal Justice Minister David Lametti said Wednesday he's concerned about the law's impact on the rights of Indigenous people but said it is too soon to talk about federal involvement in a possible court challenge.

"We will keep all options on the table," Lametti told reporters in Montreal. "There are ways to implement the bill that would safeguard Quebecers' constitutional rights."

Any federal participation in a court challenge would be related to matters of federal jurisdiction, Lametti added, and would only come if a challenge starts in Quebec.