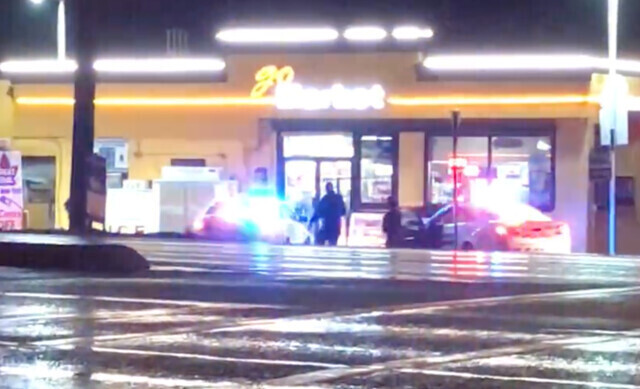 A Penticton judge is fed up with adjournments delaying the courts system, after he reluctantly agreed to push sentencing for a man who previously pleaded guilty to a bizarre chainsaw standoff at the Trout Creek gas station and liquor store.

On Wednesday morning, Robert Teal, 44, appeared in Penticton Provincial Court via video from Okanagan Correctional Centre. He had been scheduled to hear his sentence.

Teal was arrested on October 22, 2021, after he was found wielding a chainsaw at the Trout Creek Liquor Store. According to RCMP at the time, he then walked over to the adjacent gas station and was "causing a scene there and doing some damage."

He remained inside the gas station for about an hour, before police were able to move in and arrest him once the chainsaw stopped working. No injuries were reported as a result of the incident, but there was damage done to the businesses.

His defence lawyer, Nelson Selamaj, asked the court Wednesday for an adjournment since his client is trying to get a recovery bed at Discovery House, a Penticton organization that assists men with addictions issues. Teal is currently on a waitlist.

The Crown is seeking a three year jail sentence, while defence will be asking them for a conditional sentence to release Teal to a bed available at the recovery resource society.

“I will reluctantly adjourn this matter. And I say reluctantly, because this kind of seems to be a bit of a pattern in Penticton, with things being adjourned. Yesterday, almost our entire list collapsed with the adjournments,” Judge Gregory Koturbash replied.

Adjournments continue to delay others who are waiting to get before a judge and for sentencing or trial.

“I think it’s incumbent upon counsel if they are seeking an adjournment of a matter that they make that decision in advance of the day’s schedule so we can possibly back-fill with other matters, because there is a long list of people waiting to have their matters heard before the court.”

But Koturbash was pleased to hear that Teal was trying to be admitted into Discovery House.

“I know from past experience that Discovery House does excellent work, and if there is hope, hope might be found there,” he said.

“But not giving any guarantees, sir, that the plan is going to be put forward as appropriate.”

Teal will be back in court at a later date for sentencing.