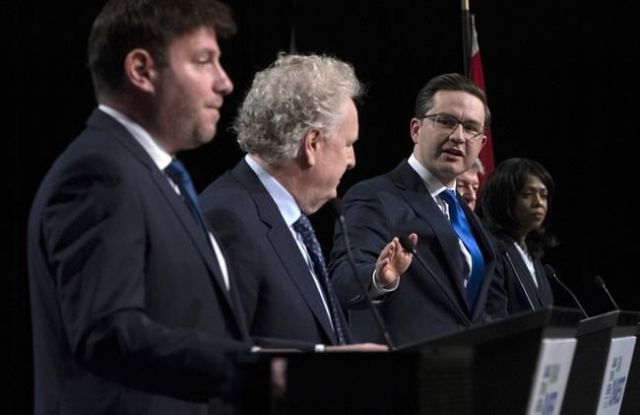 Candidates running for leadership of the federal Conservative party will appear on stage tonight for its French-language debate.

The event is taking place in Laval, Que., north of Montreal, and comes as a deadline approaches for candidates to have their supporters signed up as party members in order to be eligible to vote in the contest.

Former Quebec premier Jean Charest and longtime Ottawa-area MP Pierre Poilievre are expected to dominate much of the debate as both can speak French fluently and have charted a path to victory through the province.

Patrick Brown can also speak French and has spent the race campaigning against a controversial secularism law in Quebec that prohibits some public servants in positions of authority from wearing religious symbols on the job, which he says is an affront to religious freedom.

Party members will also be watching if Leslyn Lewis has improved on her French after she mostly stuck to a prepared script during the 2020 French-language leadership debate.

Candidates will take the stage after a language reform bill passed Quebec's legislature that critics say goes too far in protecting the French language by potentially denying the province's anglophones the ability to access services like health-care in English.