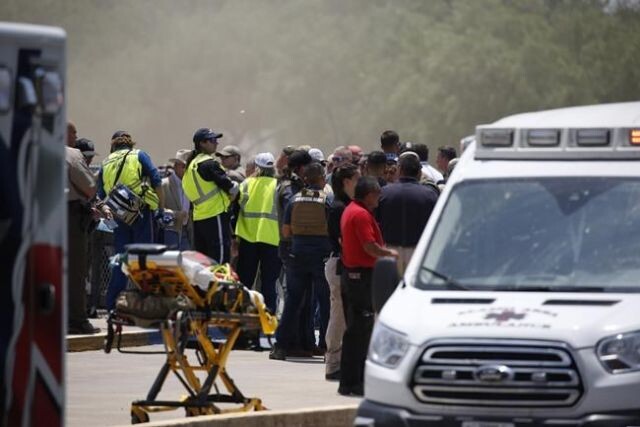 The death toll from the shooting at a Texas elementary school has risen to 18 children and three adults, a state senator said.

Sen. Roland Gutierrez said he was briefed by state police on the latest fatalities at Robb Elementary School in Uvalde, a heavily Latino community about 85 miles (135 kilometers) west of San Antonio.

Three people wounded in the attack are hospitalized in serious condition, Gutierrez told The Associated Press.

The gunman entered Robb Elementary School in Uvalde with a handgun and possibly a rifle, Gov. Greg Abbott said. Officials did not immediately reveal a motive, but the governor identified the assailant as Salvador Ramos and said he was a resident of the heavily Latino community about 85 miles (135 kilometers) west of San Antonio.

A Border Patrol agent who was nearby when the shooting began rushed into the school without waiting for backup and shot and killed the gunman, who was behind a barricade, according to a law enforcement official speaking on condition of anonymity because he was not authorized to talk about it.

The agent was wounded but able to walk out of the school, the law enforcement source said.

Abbott said the shooter was likely killed by police officers but that the events were still being investigated. The school district's police chief, Pete Arredondo, said that the attacker acted alone.

Texas Gov. Greg Abbott says 15 people were killed in a shooting Tuesday at an elementary school.

Abbott says the suspected shooter, an 18-year-old man, also died and was believed to be killed by responding officers. He says 14 children and one teacher were killed at Robb Elementary School in Uvalde, about 85 miles west of San Antonio.

Abbott says the shooter had a handgun and possibly a rifle.

Two people were dead and more than a dozen children hospitalized as multiple medical centers cared for people injured in a shooting at a Texas elementary school, hospital officials said Tuesday. Police have said the suspected shooter is in custody.

Thirteen children were taken by ambulance or bus to Uvalde Memorial Hospital after an active shooter was reported at Robb Elementary School in Uvalde, about 85 miles (135 kilometers) west of San Antonio, officials with the hospital said. The health of the children is unclear as is whether the dead are included in that count.

Another hospital, University Hospital in San Antonio, said a 66-year-old woman was in critical condition.

The nature and severity of the people's injuries wasn't immediately known, but the shooter was in custody shortly after 1 p.m, the Uvalde Police Department said.

The Uvalde Consolidated Independent School District had said an active shooter was reported at Robb Elementary School, which has an enrollment of just under 600 students. Earlier, the district had said that all schools in the district were locked down because of gunshots in the area.

A Uvalde Police Department dispatcher said the scene was still active and that no other information was immediately available. School and city officials did not immediately return messages seeking comment.

The district said that the city's civic center was being used as a reunification center.