Ex-CFL star may get 15 years 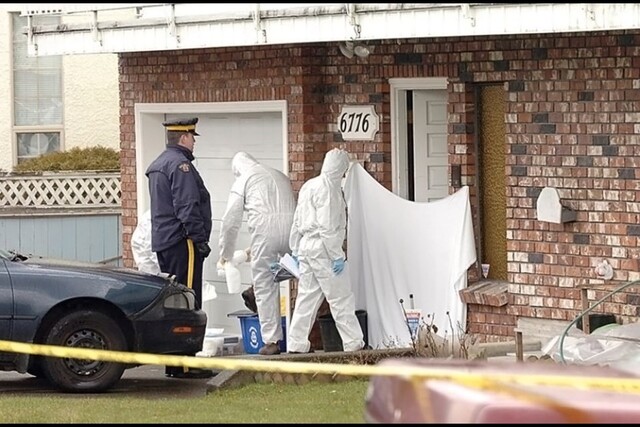 Photo: Burnaby Now File Photo
Homicide investigators scour a unit in a Colborne Avenue fourplex in March 2009 after the discovery of Kimberly Hallgarth's body inside.

A former BC Lions player who grew up playing football in North Vancouver could spend at least 15 years in prison after being found guilty of the 2009 second-degree murder of an ex-girlfriend.

Sentencing submissions were due to be heard May 24 but Davies was unavailable and has been replaced by Justice Arne Silverman at the direction of Associate Chief Justice Heather Holmes.

As the sentencing hearing was set over to June 16, prosecutor Brendan McCabe told Silverman the Crown would be seeking 15 years prison time before parole eligibility.

Boden, who went from playing football at North Vancouver's Carson Graham Secondary to a brief career as a wide receiver for the BC Lions in 2007, was charged in 2018 in the killing of Hallgarth on March 15, 2009.

Davies said the Crown had proved beyond a reasonable doubt that Boden killed Hallgarth by stomping on her head and neck and then strangling her to death.

Davies said Boden was motivated by continuing anger and resentment at Hallgarth, who he blamed for the loss of his professional football career.

Afterwards, Boden tried to cover up the murder by staging the crime scene to try to make it look like Hallgarth had died accidentally after taking drugs, Davies said.

Davies said autopsy evidence established that Hallgarth was “brutally beaten before she was choked to death.”

Members of Hallgarth's family are expected to give victim impact statements, Silverman heard.