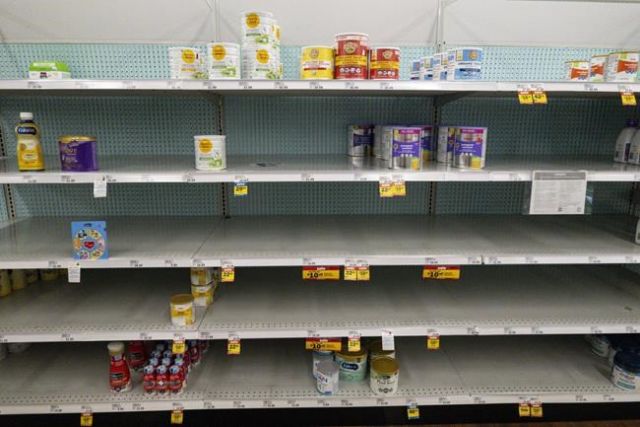 Photo: The Canadian Press
Baby formula is displayed on the shelves of a grocery store in Carmel, Ind., Tuesday, May 10, 2022. Health Canada says it will extend a temporary plan to import more baby formula from Europe and the United States, and that it's preparing for the possibility that a shortage of sunflower oil could further strain baby formula supplies in Canada. (AP Photo/Michael Conroy)

Health Canada says it is preparing for the possibility that a shortage of sunflower oil could further strain baby formula supplies in Canada.

The federal agency says it's "working closely with manufacturers" that rely on sunflower oil as a key ingredient to produce formula that still meets Canadian standards.

That includes efforts to speed up evaluation of any ingredient substitutions, noting that a switch "is considered a major change and it must undergo pre-market assessment."

Ukraine and Russia together export half of the world's sunflower oil, but the ongoing war has seen Russian invaders accused of blocking Ukrainian ports and preventing food staples from leaving.

In the meantime, Health Canada says it will extend a temporary plan to import more baby formula from Europe and the United States to bolster domestic supplies.

The plan to bring 20 infant formulas approved for use in Europe and the United States currently expires June 30. The federal agency says in an emailed statement that "the interim policy will be extended" but did not elaborate.

The national spokeswoman for the Retail Council of Canada says they've been told the order will be extended to Dec. 30, 2022.

While not as severe here, the Retail Council of Canada says its members have also experienced shortages, and in response restricted online orders and in-person purchases to meet demand.

Health Canada says the measures are all in service of mitigating further strain on Canadian formula supplies.

"Due to the urgency of the situation, and the critical nature of these products, Health Canada is monitoring the situation closely, and working with manufacturers in regards to infant formula supplies," the agency said in a statement emailed late last week.

"If additional safety or supply information is identified, Health Canada will take appropriate action and inform Canadians as needed."

Health Canada introduced the interim order to extend imports March 10, in a bid "to prevent and mitigate shortages," listing several formulas that grew to 20 by May 9 with the addition of a liquid Enfamil product.

The agency recommended that the Canadian Food Inspection Agency temporarily lift food labelling and "composition requirements" for products from the United States, the United Kingdom, Ireland and Germany that are otherwise comparable to Canadian standards.

The Retail Council of Canada says Ottawa is working to mitigate the potential of further shortages brought on by the war in Ukraine, which "is having a massive impact on cost of all oils."

"But sunflower oil is a particular ingredient in baby formula," says Michelle Wasylyshen.

"And so given that we know that the war in Ukraine is likely not going to end for some time, and that the impact of sunflower flower oil will be significant on these products, Health Canada has been working with manufacturers to see if there's ways to alter that ingredient within their formulas in advance of this pending shortage so that they can get ahead of it."