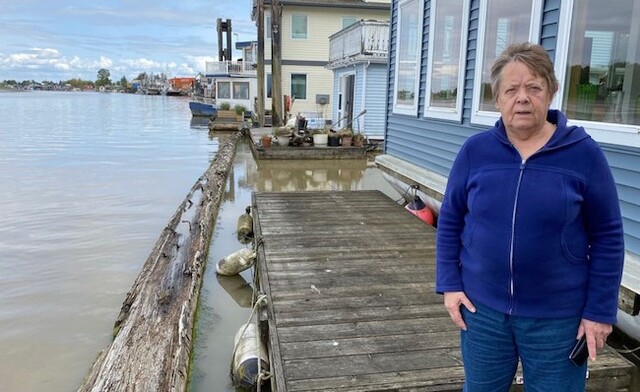 Her home is starting to sit on mud very quickly.

Ladner Reach float homeowner Inger Kam is raising alarm and trying to get answers on what will be done about the buildup of sediment in the Fraser River channel, which is beginning to tilt her home and is especially concerning during low tide.

“It doesn’t seem like anyone wants to take responsibility and get something done. This is happening fast and it’s only going to get worse,” Kam says.

Earlier flooding in the Fraser Valley and resulting debris has sped up the build-up, and Kam wonders why an ongoing dredging maintenance program is still not in place despite years of lobbying by the City of Delta.

In an email to the province, Delta resident Mike Owen, an organizer with the Ladner Sediment Group, said the channels and leased water lots from the province are being inundated at an alarming rate.

This winter, Ladner Reach received one-to-three feet of sediment, a result of flooding of the Fraser River and its tributaries, he said.

Owen believes both the province and federal governments have increased the sediment flow into the lower Fraser River by over-regulating sediment removal and by approving the diversion of water flow for the benefit of economic activity in the main south arm of the river.

He listed a series of recommendations including government realizing that dredging is vital and can be done immediately as well as Ottawa halting ocean disposal fees.

They said they recognize the Vancouver Fraser Port Authority’s commitment to continue to work with them along with other government agencies and stakeholders toward a long-term sustainable dredging program, and while they appreciated the port’s announcement of $1 million in funding for local Delta channel dredging for the upcoming year, they were hopeful that contribution would be a catalyst toward the development of a comprehensive, funded long-term plan for maintaining the local channels.

“This is critical to mitigate the economic, social and environmental impacts that will occur in all our communities if further action is not taken,” Harvie wrote.

Last summer, the port authority announced the one-time funding towards what it said was a near-term dredging solution to support key Delta channels within the Fraser River communities, focusing on Ladner Harbour and Gunderson Slough.

The port noted that for 10 years, and as a gesture of good will, it committed to providing a $7 million interim dredging solution to support the Fraser River communities.

As the funding for the program has concluded, the VFPA is working with government to identify other sources of funding that will provide a longer-term solution to support dredging in the local channels.

A Delta report last year noted that preliminary annual cost estimates for dredging the priority local channels, based on hydrological studies provided by VFPA in 2020, has Delta at $900,000, Richmond at $575,000 and the channels up-river of Annacis Island at $250,000.

Another report warned that without regular maintenance dredging, the river will soon revert back to the same condition that prompted remedial efforts to restore local channel navigability.

Back in 2012, Delta entered into a joint $10-million funding program with the province, the port authority and the City of Richmond to dredge channels around Ladner and Steveston. There was no commitment at the time to come up with an ongoing maintenance program once the money was spent.